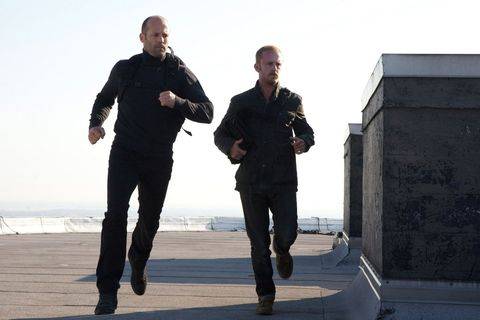 Back when I was a novice film producer in a Hollywood atmosphere of remake mania, I used to always think of different films that were ripe for an update.  Every producer dreamed of a “Three Days of the Condor” remake in the days of Rovian government secrecy.  The Mechanic, a ’70’s Charles Bronson/Jan Michael Vincent vehicle was one of the prime films on my remake list.  Thus, I was very curious about the reworking of the film, more than 40 years later, by the original producers and their sons.   Set in New Orleans and given a much darker, grittier feel, than the original, The Mechanic is the story of paid assassins, solitary men, who make their living by killing on assignment.  Jason Stratham plays Arthur Bishop, who is given the difficult task of executing Harry McKenna, his mentor and good friend.  Ben Foster brings his usual intensity to the role of Steve McKenna, Harry’s prodigal son, who turns up at the his father’s funeral and wants to get into the family business.  When Arthur meets Steve, there are explosive results!

Since the original Mechanic is my favorite Charles Bronson movie and one of those ’70’s films, that I used to watch over and over on TV, I naturally compare the two.  Unfortunately, the new film had a lot to live up to and fell somewhat short.  More action packed than the original, The Mechanic (2011) is faster paced and far more violent.  In fact, there is a lot of violence strictly for violence sake that could’ve been replaced with story elements from its predecessor.  And while it sped up the pace, it lost the very core of the story – Arthur’s need for human companionship which ultimately leads to his downfall.  Michael Vincent played Steve as a cocky, but very charming, spoiled rich kid, who lived a fast life off the fortune of his father.  He is basically a sociopath.  Foster’s Steve is a violent street kid played with too much sentiment.  While Bronson and Michael Vincent had a weird sort of assassin bromance, Stratham and Foster are more like ships passing in the deadly night, with too little emphasis placed on their relationship.   The vital chemistry and bonding between Arthur and Steve that made the movie a classic is gone in this version.  In addition, Arthur is supposed to be training Steve, but there is very little screen time given to that training.  There is a glaring plot hole where Steve totally disregards Arthur’s instructions and botches his first kill.   The scene is cartoonish, unrealistic, and didn’t work.  It just didn’t make sense that Steve would choose a method that would put him at risk of both rape and death!  It was also unbelievable that he actually survived it!  In stressing the action, the film lost its heart.  In addition, California and Italy were sexier backdrops than New Orleans.  Then there is the issue of the ending.  The original script is like a great chess game.  There was no reason to change it and the new version would have been better, if it had kept that great ending completely intact, including the parting message!

Ben Foster is one of today’s best young working actors.  I first loved him in “3:10 to Yuma” then again in “The Messenger”. While watching him here, I kept trying to remember where I had seen him before, as he literally disappears into this role.  Stratham is his usual monosyllabic Brit self and furthers his ascent as our current action hero with very little acting required.  Mini Arden, in the only female part, is striking but not given enough to do.  She is little more than beautiful set dressing.

Since the original producers and screenwriter were in place, it makes no sense that this wasn’t a better remake.   This was a case of “if it ain’t broke, don’t fix it!” I would have stuck to the original script and simply added some action!  I much prefer the original.  I advise that you see The Mechanic (1974) currently running on Netflix Watch Instantly, for a far more elegantly executed story.  Then see The Mechanic, currently in theaters, for the action.