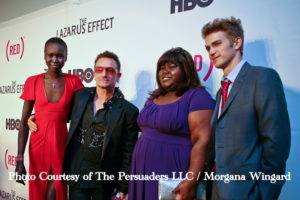 On May 4th, ((RED) with Anonymous Content and HBO Documentary Films screened the documentary The Lazarus Effect, at a star-studded event at the Museum of Modern Art.  The Lazarus Effect, is a half hour documentary airing on HBO on Monday, May 24th, 2010 at 9:00pm, which is at the center of a multi-media campaign by ((RED) to raise awareness about the impact of large scale AIDS programs at work in Sub-Saharan Africa.  It follows the stories of four individuals whose lives have been transformed from a near death existence to a healthier, more stable life in as little as three months.  The film tracks the incredible power of anti-retroviral drugs (ARVs) and their ability to transform HIV positive people from sickly and deathly thin to healthy and full of hope.  It was truly amazing to watch as people were completely transformed over the course of only three months by taking ARVs, a medicine which only costs 40 cents per day to fund.

HIV/AIDS is a preventable and treatable disease, yet it has killed more than 20 million people in Africa. In 2002, more than 29 million people in Sub-Saharan Africa had HIV, yet only 50,000 people could afford the $10,000 a year treatment they needed to stay alive. Today, thanks to increased political support, a push by global health organizations, and contributions from the private sector, the cost of ARV drugs is now around 40 cents a day and more than three million people in Africa, are now receiving treatment.  The availability of antiretroviral (ARV) drugs, which block HIV’s assault on the body’s immune system, can transform the lives of people from near death to health in as little as three months.  This has been dubbed “The Lazarus Effect” after the story in the Bible when Jesus resurrected Lazarus from the dead.

As I walked around taking photos during the pre-screening reception, I ran into Zach Galifianakis and asked if I could get a shot of him.  He said he would only take a photo if I was also in the shot, so I happily agreed.  I only found out later, that he was making a thumbs-down sign in the photo!  Thanks, Zach.

I then asked Iman for a photo, and she also wanted me in the picture!  Not wanting to argue with one of the greatest supermodels in the world, I obliged.  Were Chris Rock and Bono going to insist on photos with me as well?  Sadly, no.

After credits rolled, guests headed over to the Ace Hotel’s Liberty Hall for the after-party.  On my way out, I saw that Hayden Christensen was surrounded by adoring fans asking for autographs.

For more information on The Lazarus Effect and to find out how you can help, go to:  www.joinred.com

The stars came out for the "Just Wright" Premiere in NYC

Organic Elegance: Celebrating the 10th Anniversary of the Continuum Center for Health and Healing

Inspiration Launches At The International Center for Photography