Entertainment, TGATP Speak Easy
February 28, 2016
by That Girl At the Party
0 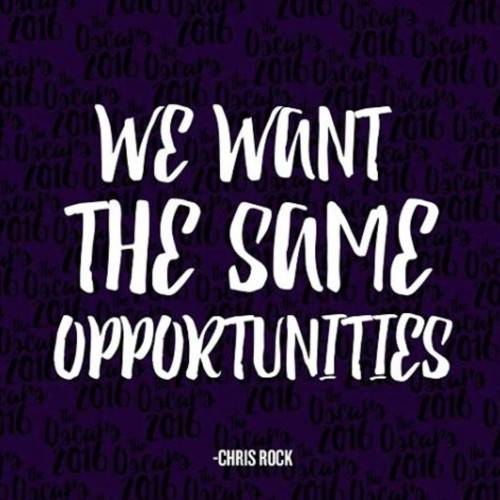 I wanted it to be great but Chris Rock’s monologue and subsequent skits at the Oscars made a mockery of the very serious issue of racism in Hollywood. There has been lots of talk of coonery on social media and I hardily agree. First off, satire needs to turn stereotypes on their head not reinforce them. Rock’s buffoonery made racism in Hollywood more exceptable rather than the shame that it actually is.

The tap dancing started early. I could have done without his swipe at Jada Pinckett Smith. Had the Smiths wanted to attend  they would’ve been sent tickets. Will is a major money maker for Hollywood. To insinuate that “she wasn’t invited anyway” was petty and ugly. And that the Academy President was shown sniggering at this was just junior high schoolish and highly inappropriate. Sofia Vegara enthusiastically whooping it up at Jada’s expense also pissed me off. The racists in the viewing audience could rejoice as they watched a black performer inexplicably rag on two others. He did Janet Hubert, the Queen of hating in the Smiths, so real well that I’m surprised he didn’t trot her ass out with Stacey Dash.

And speaking of that weird Stacey Dash moment. She’s an idiot. But that joke fell flat too because the white people in the audience either didn’t get the gag or they agree with her. But she is so damn Z-list, she was just happy for the attention and didn’t even know that the joke was on her.

In fact, instead of making the monologue comedic, which turned the topic into a joke, it would have been far better for Chris to take off the comedy hat and speak as an intelligent Black man about the issue. He could then have joked throughout the rest of the broadcast, which would have been much more powerful;. Instead he justified Hollywood racism by portraying black people as ghetto, stupid and unimportant as moviegoers. Jokes about grandma hanging from a tree, black people being shot by the police, and Asian child labor were just not funny. Purportedly, the 99.9 percent white audience didn’t know what to do and we’re looking to the few black folks there to see if they could laugh. Unfortunately, they seemed to have gotten the go-ahead as folks were wailing with laughter.

Secondly, to insinuate that the protestors and people, who decided to boycott, should be lucky black people are no longer being lynched and thus their protest was unjustified, was idiotic. Hollywood is a billion dollar industry and we are being shut out of it at every level. It is well past time we made a stink about it. The racism in hiring from top to bottom is actionable and we need to make sure it is stopped.

Thirdly, alll the ghetto skits from Tracey Morgan mamified as ‘The Danish Girl” to Whoppi pushing a mop to the ignorant black moviegoers, (especially the woman with the wig all down her head,) who didn’t know the Oscar nominated films to the Suge Knight nonsense to the guy, who claimed “Superfly” was his favorite film – the racist stereotypes were so fast and furious they turned his hosting gig into a coon fest that was a racist affront.

Black should not mean undignified and when we think of black people we should not always think rap music and the ghetto. It would have been far better to make a statement in the monologue without the snippy swipes at people,who stood up against a racism that is deeply entrenched and without the stupid skits, that did far more harm than good. There are millions of us that have seen all of the Oscar films. Now that woman will her rug askew will be what studio execs think about when ever we try to pitch them anything other than comedies, as movies black folks will attend. I feel real sorry for the next one of us, that tries to pitch a film like “Selma” or “The Butler.”

It should be remembered that the Oscars are broadcast around the globe. Millions and millions saw us portrayed poorly. To portray Black people to the entire world as uncultured was truly unforgivable and coonish behavior of the highest order. To say “we want the same opportunities” then portray black people as idiiots made me embarassed to be black. If we truly want the same opportunities, we need to stop reinforcing the worst stereotypes about our own people. Otherwise, we are going to be saying #OscarsSoWhite for the many, many decades too come. Chris, you should’ve known much better.

Why #ZoeSaldana Is All Wrong As Nina