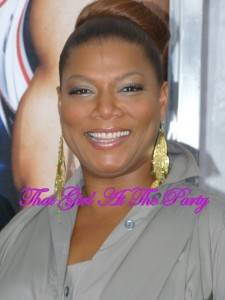 The premiere of Fox Searchlight’s new romantic comedy, Just Wright, starring Queen Latifah and Common, drew the who’s who of Black Hollywood with a screening at the Ziegfield followed by a star-studded party at the Empire Hotel Rootop, sponsored by Cover Girl.  Literally everyone turned out, including some folks I had forgotten all about!  I rode the elevator up with Spike Lee and congratulated him on his episode of “Who Do You Think You Are?”, which I watched on Hulu the previous weekend.  Once upstairs, I caught up with Umi, Mos Def‘s Mom and the “Umi” famously immortalized in his hip-hop hit, “Umi Says“) who introduced me to Common‘s Mom.  I also got to chat with Greg Mathias (or Judge Mathias, as he is known to the TV viewers) who, to my delight, said that he had heard of TGATP!  Sherri Shepard, who I watch everyday as I write this column,  also warmly greeted TGATP and I look forward to interviewing her in the future.  I was also very happy to catch up with supermodels Toccara Jones and Damaris Lewis. Queen Latifah and Common, who came with his Mom, Dr. Mahalia Hines were both lovely to all of the guests.  Also in attendance were:  Nick Cannon (sans Mariah), Dwayne Wade, Phylicia Rashad and her lovely daughter, Stuart Scott and his family, Grizz Chapman, Roxanne Shante, Roland Martin, Treach, Olivia, Michael Landes, James Pickens Jr., Chicago Football Players- Otis Willson, Israel Idonije, Matt Forte, Jarron Gilbert, Matt Toeaina, Garrett Wolfe, and Earl Bennett, NJ Nets player and co-star Bobby Simmons, Rapper Phoenix Phenom, Serge Ibaka, Michael Elliott, Vin Rock; DJ Kay Gee, Laz Alonso. Also on hand was a very camera grumpy, Denzel Washington, who reminded TGATP of a Black Chevy Chase!

HBO and ((Red) Premiere "The Lazarus Effect" at the MOMA

Step Is One Of My Favorite Documentaries Of All Times