Last night, the ICP was all a glitter in celebration of the launch of Inspiration, a collaborative book that celebrates some of the world’s most inspiring women of color written by Crystal McCrary and photographed by the ICP’s own, Lauri Lyons. 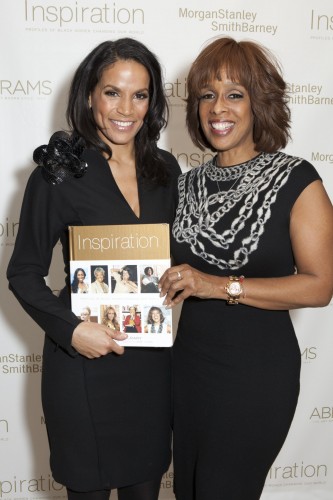 Inspiration shares the personal stories and showcases the unique voices of 30 extraordinary African-American women.  Whether in the White House or on the courts of Wimbledon, in Hollywood or on the stage of the Metropolitan Opera House, these women have influenced the social, cultural, and political landscape of this country, and even the world.  Luminaries such as Patti LaBelle, Venus Williams, Susan Taylor, and Judith Jamison speak about the challenges they’ve faced and the victories they’ve won throughout their careers.  These inspiring black women pass their knowledge and lessons on to a new generation of women in intimate first-person essays and stunning color portraits.

Crystal McCrary is the co-creator of BET’s show Leading Women and the author of the novels Gotham Diaries and Homecourt Advantage. She is a frequent morning show commentator and sits on the advisory board of Jumpstart.  She lives in New York City.

Lauri Lyons is a faculty member at the International Center of Photography and the Rhode Island School of Design. She has photographed for the Source, Essence, and Fortune, among other magazines.  In 2006, she became the first black female photographer to sign with Getty Images. (TGATP finds this incredible!  Why did it take Getty Images eleven years to sign a Black female photographer??)  She lives in New York City.

Top Five Regrets of the Dying

Oprah’s BFF Attends the NYC Premiere of Mission To Mermaids