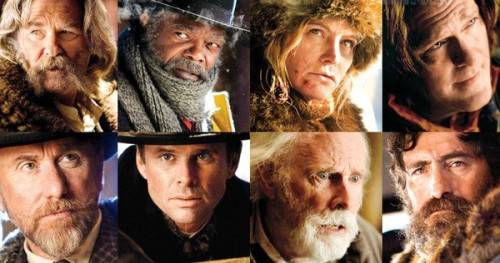 From Reservoir Dogs to Pulp Fiction through Jackie Brown to Death Car, I have always been a big Quentin Tarantino fan. I even liked “Django Unchained” up until the end, which I felt problematically demonized the sellout Negro more than the slaveowners.

Quentin’s love for everything cinematic literally bursts through his films making them more than a mere movie outing. A Tarantino film is an experience and a celebration of every movie ever made.

And while I ardently disagree with his overuse of the N-word – it was appropriate in “Pulp Fiction” and “Django” but it was awkward and unnecessary in this film – he’s more transracially Black than Rachel Dolezal, having with Spike Lee created the career of Samuel L Jackson and brought back Pam Grier, if only for a brief moment. In addition, anyone, who has the courage to stand up and call out the police “murderers as murderers” and stand by it, in the face of opposition and a potential boycott, gets my undying /support.

The Hateful 8 delivers all the things we have come to expect from a Tarantino film.  There are a ton of great monologues delivered by unforgettable characters, loads of gratuitous violence and bloodshed, and tons of twisty story lines.  Shot on 70mm film in the style of the epic Westerns of Hollywood’s past, it is a glorious homage to both the Western and one room murder mystery genres. 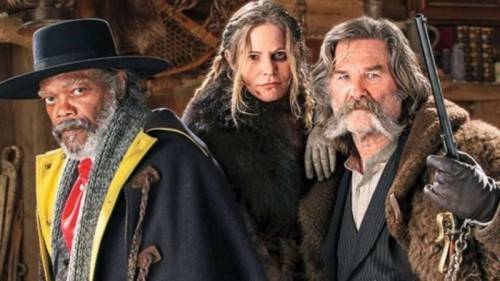 The plot is simple. Eight strangers are snowbound in a cabin in the middle of nowhere. Some are who they say they are and some are not. But everyone has their own reason for being in the wrong place at the wrong time. There fates intersect in very interesting ways that could only come from the fun and twisted mind of Tarantino.

Jennifer Jason Leigh shines as the murderous and wily Daisy Domergue, making you laugh with her and hate her at the same time. At the press conference for the film, Leigh stared she saw redeeming qualities in the dismal character, to which everyone present had a good laugh, including Tarantino. Walton Goggins, who was a new face to me, (I didn’t remember him in Django”) is a welcome returning regular with his turn as Chris Mannix, the supposed new sheriff of Red Rock. Michael Madsen and Tim Roth are always a striking presence in any film and it was wonderful to see veteran Bruce Dern.

But of course, the star of the film is Samuel L Jackson, as former Union soldier and now bounty hunter Major Marquis Warren. Jackson delivers a memorable, if slightly over the top monologue involving Bruce Dern’s son that is so OTT, it almost rivals his opening monologue in “Pulp Fiction.” Then there is the legendary Kurt Russell as John “The Hangman” Ruth, who always delivers his bounty alive. Russell is always riveting on film and steals every scene he appears in. I loved him in one of my Tarantino favorites “Death Car”, so was mad thrilled to see him here. I wish the quick cameo by kick ass stunt woman Zoe Bell, could’ve been fleshed out. She is gone too soon. And who can ever get enough of Channing Tatum and that smirk?

The Hateful 8 delivers the same punchy dialogue and cartoonish violence we have come to expect from a Tarantino film. While a tad bit overlong and over violent in the end- I would have shaved about 20 minutes – the viewer is never bored and it is a worthwhile holiday diversion. It’s a definite must-see.

Wishing You Peace and Joy This Holiday Season!

Seven Holiday Movies You Should See!