It was a twofer on Monday, as I first stopped by the NYC.GO Restaurant Week closing night party at the Rock and Roll Hall of Fame Annex then took off for the after party for the latest Tarantino epic, “Inglorious Basterds”.  The food was just amazing and we were treated to a tour of the museum complete with the coolest audio accompaniment that plays corresponding tracks as you near displays.  I have wanted to see the John Lennon display for months, so that was a particular treat!  I did, however, have a seriously tearful moment when I saw his blood stained glasses in a display case and another display case with the clothes he wore the day he died in a brown paper sack.  Yoko Ono explains in the caption that despite all John’s fame and wealth, at the end, she was given this brown paper bag with his belongings just like any other person.  It was just so horrible. 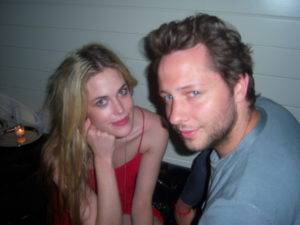 After cabbed to the Meat Packing District for the fete celebrating “Inglorious Basterds”. Unfortunately, no Brad and Angie in the house (which was probably a good thing as my latest ex resembles Brad, so I may have felt overly familiar.  In fact, this dude was the worst guy I ever loved and can be best described as an “inglorious Basterd”!  My friends and I refer to him as “Lifetime Movie Man” as he turned out to be a totally different person in the end!).

Did have a quick word with Quentin Tarantino, who was not as affable as when I met him at the opening of his West Village eatery a few years back.  I wanted to give him a small piece over him naming the Black chick in “Death Car”, Jungle Julia, which I found just over the top and somewhat racist.  I mean, really!  More yummy food but I was already full an open bar, and loads of great looking people (including this really lanky blonde named Lita who was having a tete a tete with Andre Balazs). My companion had a brief chat with Uber-Producer, Lawrence Bender, who has produced every Tarantino film since “Reservoir Dogs” back in ‘92.  Also, finally met the dapper Andrew Saffir, who runs the Cinema Society, which organized the soiree.

Tarantino’s The Hateful 8 Is A Must-See