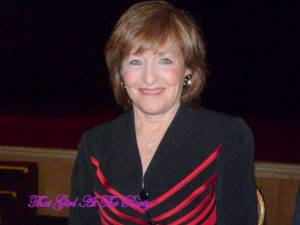 Frederica von Stade or “Flicka” as she is affectionately nicknamed, is an extraordinary woman and it was amazing to learn about her Life through this tribute.   She is an extraordinary talent and we have been blessed with her amazing voice for four decades.  Described by the New York Times as “one of America’s finest artists and singers, ” she began at the very top, receiving a contract from Sir Rudolf Bing during the Metropolitan Opera auditions and since her debut has enriched classical music for over four decades.  Flicka has sang nearly all the great roles with the Met and in 2000, the company celebrated the 30th anniversary of her debut with a new production of the Merry Widow.

In 1998, American composer Richard Danielpour helped Frederica von Stade to realize an artistic and personal dream when he wrote Elegies.  The work, scored for orchestra, mezzo-soprano and baritone, is a tribute to Miss von Stade’s father, Charles von Stade, who was killed in the final days of World War II, and is based on the text of letters Mr. von Stade sent to his wife during the war.  It is through these letters that Frederica von Stade came to know her father, who died two months before her birth.  In January 1998 the Jacksonville Symphony, led by Roger Nierenberg, offered the world premiere of Elegies with performances in Florida and in New York’s Carnegie Hall. Elegies is available on Sony Classical and has been performed throughout North America and Europe.

Miss von Stade has made over seventy recordings with every major label, including complete operas, aria albums, symphonic works, solo recital programs, and popular crossover albums. Her recordings have garnered six Grammy nominations, two Grand Prix du Disc awards, the Deutsche Schallplattenpreis, Italy’s Premio della Critica Discografica, and “Best of the Year” citations by Stereo Review and Opera News.   She has enjoyed the distinction of holding simultaneously the first and second places on national sales charts for Angel/EMI’s Show Boat and Telarc’s The Sound of Music.

Miss von Stade appears regularly on television, through numerous PBS and other broadcasts. In 2001, she participated in the opening of Philadelphia’s Kimmel Center for the Performing Arts performing in a concert together with Sir Elton John, Andre Watts, and the Philadelphia Orchestra.  The following year, she was seen on national television in a concert with the Mormon Tabernacle Choir as part of the opening ceremonies of the 2002 Salt Lake City Winter Olympic Games. Other highlights of recent television appearances include a gala concert with the San Francisco Symphony to open the 1998-99 season at New York’s Carnegie Hall and a “Live from Lincoln Center” television event opening the 1999 season of the Mostly Mozart Festival, both broadcast throughout North America.  She can be seen in “Live from the Met” performances as Cherubino, Hansel, and Idamante, and through PBS broadcasts of her celebration of the art of American song with Thomas Hampson, Marilyn Horne, Dawn Upshaw and Jerry Hadley in a program at New York’s Town Hall titled “I Hear America Singing,” as well as, a program with Tyne Daly, which included arias, art songs and popular crossover material.  Also seen on PBS were a holiday special, “Christmas with Flicka,” shot on location in Salzburg, “A Carnegie Hall Christmas” with Kathleen Battle, and an evening of operatic and musical theater selections with Samuel Ramey and Jerry Hadley, titled “Flicka and Friends.” Her recent portrayals in Dangerous Liaisons and The Aspern Papers were broadcast throughout North America.  She can also be seen in the Unitel film of the classic Jean-Pierre Ponnelle production of La cenerentola.

Frederica von Stade’s 2008-2009 season included recital appearances in Denver, Chicago (opposite Barbara Cook and Dianne Reeves) and Cleveland.  She toured Asia with the UBS Verbier Festival Orchestra with stops in Singapore, Taipei and Tokyo.  She reprised her role of Madeline in Jake Heggie’s new chamber opera Three Decembers at San Francisco Opera, a work the composer composed specifically for her.  Ms. von Stade also appeared in duo recital and concert with longtime colleague Samuel Ramey at the Kennedy Center, Washington DC, as well as in Seattle, Charleston, Tampa, Providence, RI and Austin, TX.  She also honored her beloved colleague Marilyn Horne in the celebration of her 75th birthday at Carnegie Hall.

Frederica von Stade is the holder of honorary doctorates from Yale University, Boston University, the San Francisco Conservatory of Music (which holds a Frederica von Stade Distinguished Chair in Voice), the Georgetown University School of Medicine, and her alma mater, the Mannes School of Music.  In 1983, Miss von Stade she was honored with an award given at The White House by President Reagan in recognition of her significant contribution to the arts and in 1998, she was awarded France’s highest honor in the Arts when she was appointed as an officer of L’Ordre des Arts et des Lettres.

From the wonderful and hilarious testimonials that her various friends and associates gave at the luncheon, Flicka sounds like the perfect colleague and friend.  I am very honored to have been invited to this luncheon and to have met her.