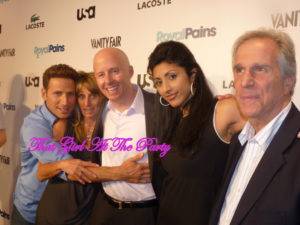 This weekend, TGATP attended two events to celebrate the summer premiere of hit original series Royal Pains. The first party was held at the Lacoste store on Fifth Avenue on Tuesday night and featured cocktails and appearnces by the show’s stars including new cast member Henry Winkler.  Then on Thursday, USA Network and Lacoste held the “Royal Pains Summer Shirt Exchange,” where consumers traded in a “gently used” summer shirt in exchange for a $50 gift card redeemable at any Lacoste boutique!  For every shirt collected, USA donated $10 to Doctors Without Borders, the international medical humanitarian organization. At the end of the promotion, all the shirts collected were donated to HELP USA, which provides housing and supportive services to people in need throughout the country.

The cast of Royal Pains – Mark Feuerstein, Paulo Costanzo, Reshma Shetty and Jill Flint – were in attendance at both events and donated their own summer shirts.  The Royal Pains Summer Shirt Exchange included an interactive Royal Pains experience, which was designed to replicate the perfect Hampton’s summer escape reminiscent of the locale where Dr. Hank is a Doctor on Demand.  Doctors Without Borders was on hand to share their courageous and heart-warming experiences working overseas.

TGATP also fell in love with the cool laid-back sounds of Australian Surf Rock/Pop band Tamarama, who performed at the event.   These boys are ones to watch, ladies, as they are my favorite combination – a band of hot foreign boys making great music together!  Pottsy is so pretty I felt like a lesbian and what was Whitney Port thinking to call it quits with hottie guitarist Jay?  Their debut album dropped June 1 and I will be reviewing it (and them) in future posts!  Tamarama will be headlining at Hoboken’s legendary Maxwell’s (1039 Washington Street
Hoboken, NJ 07030-5201 /201-653-1703) on Monday night, June 7th.

Watch the Royal Pains second season on Thursday at 10/9c on USA.

Young Patron's Circle of the American Friends of the Louvre Soiree

The Fifteenth Anniversary of Pier 59 Studios