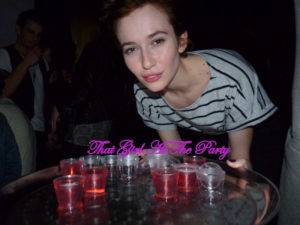 There is nothing I love more than animals!  I have always had a pet or three and am currently blessed to be co-habitiating with Dinah Washington Cat, the most personable seven pounds of feline love and personality to ever grace the planet!  Imagine “Marley” in cat form and you have Dinah!  Thus, when the lovely gals at Harrison & Shriftman invited TGATP to cover the 15th Anniversary of the Pier 59 Studios, I was absolutely delighted to see that there would be baby lions, a baby tiger, a baby leopard, and an albino boa constrictor as featured guests!  Hosted by Sr. VP of IMG, Fern Mallis and Federico Pignatelli, Founder of Art Fashion Group, the party was beautifully staged in the cavernous studios.  Each room featured different setups including one which featured  a live photo installation encapsulating the evolution of the camera.  The massive Polaroid camera from the 1970’s, one of the few remaining in the world, particularly fascinated me!  For a $500 donation to Doctors Without Borders, guests were allowed to sit for Polaroid portraits with renowned photographers, such as, Gilles Bennisom. 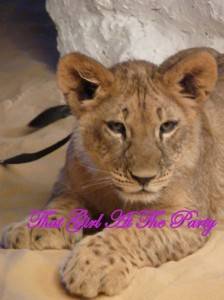 When the baby felines were brought out, I stood transfixed and armed with my brand spanking new Panasonic Lumix, FZ35 (a lil’ dream gift of a camera that I highly recommend.  Thanks, Panasonic!), I got some truly great shots!  It was like being on photographic safari right on the far edge of Chelsea, although the only danger was losing a shot due to other photogs, who were inexplicably allowed better positioning than TGATP, forcing me to creatively shoot between all manner of human and metal obstructions!  The love between the trainers and the baby cats was just radiating and it was such a beautiful thing to watch them smile and fawn over them.  It made me want a career change to big cat handler!  They are so adorable, I’d wanna work 24-7!

The studios themselves were amazing and I am surprised that I never worked in them, as they have been around and at the forefront of artistry in photography, for fifteen years,.  According to their website, the studios were “created to accommodate the diverse needs of photographers designers, ad agencies, and TV and film production companies with a 100,000 square foot photography facility and multimedia complex It has been home to image-industry legend leaders and trailblazers since opening in 1994.” 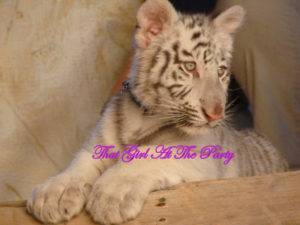 On the decks and all glittered out was DJ Donna Cruz, CEO and Founder of Rasa Music, who is also Tom Silverman’s wife.  It was great to see Tom looking dapper and well!  I have known him since, back in the day, when I worked in the music biz and he was CEO of Tommy Boy records and helmed the yearly New Music Seminar.  He recently re-launched the NMS as one-day events in various cities, which is a fantastic thing as it was one of the better music festivals.  Will Smith, Tribe Called Quest, De La Soul, and Public Enemy are just some of the acts that were discovered, in part, due to the NMS.  I remember seeing the unsigned Me’shell Ndegeocello perform at CBGBs in a NMS Black Rock showcase.  I signed Absract, the opening band who were a black rock unit fusing hip-hop with heavy metal, way before anyone else was doing it.  They were unfortunately, too ahead of their time as it was another few years before the likes of Kid Rock and Everlast broke through with that trend.  The South by Southwest Festival is the closest feel to the old NMS and owes its format to it.  I look forward to seeing this new incarnation of the NMS grow.

The party really picked up right when I had to leave.  But alas, my chariot awaited as I have another five days of Fashion Week stuff to get through, so I had to call it an early night.  We were sent home with a lovely Valentine’s themed gift bag with  a soy candle and a red silk covered edition of the Kama Sutra!  How flawless was that?!