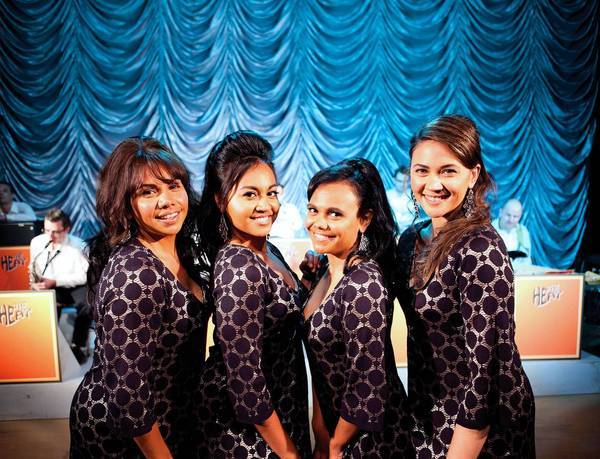 Funny, engaging, and deeply moving “The Sapphires” is a perfect feel-good film and not to be missed!  It recounts the adventures of four amazing Australian Aboriginal women, who despite the great racism they were suffering at home, formed a girl group and traveled to Vietnam to entertain American troops.  With its parallels to both the experiences of African-Americans and the universality of the trials that women still experience, I have not loved a movie this much in a very long time.  Their story is uplifting and inspiring and stayed with me long after I left the theater.  Inspired by a true story, the film is based on the hit stage play written by Tony Briggs about his incredible mother and aunt, who were the real Sapphires. I felt an instant kinship and a pride in these awesome women.

I also learned so many things that I never knew about my Australian kin.  For example, while I knew about the “Stolen Generations” where under a racist Australian  edit, thousands of light-skinned Aboriginal children were kidnapped from their families and taken to White homes;  I had no idea that the practice was still going on until the late ’70s!  In addition, I never knew that Aboriginal people are referred to as “Black” just like African-Americans.  The lovely thing about the film is that these facts are provided as a backdrop to the girls’ story without bringing the tone of the film down.  In that manner it reminded me of “The Commitments” where we learned about Irish poverty and strife but only as an adjunct to the story.  Knowing the odds the girls faced only makes the audience root for and love them more!

Director Wayne Blair, making his feature film debut, brings out the best in all his performers and keeps the audience invested in each woman’s story.  And what performances they are!  Chris Dowd is perfect as the Irishman, who sees the potential in the girls and manages them.  All four of the women – Deborah Mailman (the only cast member to be in the stage version), Jessica Mauboy, Miranda Tapsell, and Shari Sebbens  – are riveting and believable.  Another standout is fine as wine, Isiah Washington-lookalike Tory Kittles as the American soldier, who steals one of the girl’s heart.  I am so hoping that some enterprising theatre producer will have the good sense to bring “The Sapphires” to the Broadway stage.  The film is so much fun, it would definitely be great to see the story in its original format.

From start to finish, I  laughed, I cried and I rejoiced and by the end, I was on my feet!  If you see only one movie this month, make it the “The Sapphires”!

TGATP Outrage Over The CNN Reporting of The Steubenville Verdict

Speed Cleaning Tips From The Maids