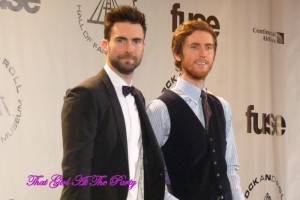 Last night, The Rock and Roll Hall of Fame held their 25th Annual Induction Ceremony at the Waldorf Astoria. Everybody, that is anybody in music and media, was in attendance!  I spotted Barry Diller on my way in and Meryl Streep was in the building to support 2010 inductees, Abba.  After the show, I chatted with the extremely gracious Ronnie Spector and adorable up and comer, Fefe Dobson.  I can’t wait for Fefe’s album to drop in May.  Also, caught my former childhood crush, Graham Nash of The Hollies and Crosby, Stills, and Nash, who started my whole lifelong Band-Aid preference for Brit musos!   (Hilariously, the legitimate guests were joined by the ubiquitous crasher, who claims he is an executive at Comcast, and his Asian companion.  A fellow journalist spotted them scurrying through the lobby gift bags in hand, right under the noses of both hotel security and the cops, presumably in route to the  exclusive after party!  Honestly, these two are better than the Salahis!)

This year’s inductees were:

ABBA inducted by Barry and Robin Gibb (The Bee Gees)

The rock celebration continues on Fuse throughout the month, with “Rock Monster March,” a block of classic rock programming.  Throughout the month of March, Fuse will broadcast concerts from megastars Bob Marley, David Bowie, and 2010 Rock Hall Inductees, Genesis.  In addition, the network will air “The History of Rock and Roll,” a chronological look at rock landmarks starting in the 1950s and  including movements, such as the British Invasion, punk, grunge, metal, and more.

The Rock and Roll Hall of Fame, based in Cleveland Ohio, is a non-profit organization that exists to educate rock fans and scholars from around the world about the history and continuing significance of rock and roll music.  It carries out this mission through its operation of a world-class museum that collects, preserves, exhibits and interprets the rock art form.  In addition, the museum’s recently launched website features behind the scenes perspectives through exclusive artist interviews, induction videos, photo galleries, songs, induction speech transcripts, and merchandise.  Check it out at:  www.rockhall.com