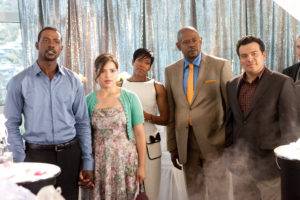 The casting of America Ferrera, Forest Whitaker, Taye Diggs, Carlos Mencia, and Regina King with a story about cross-cultural marriage seemed a winning combo for a truly hilarious film.  But like a glass of very expensive champagne that has been left sitting out too long, the film falls flat in both its comedic and poignant moments.  It was extremely disappointing as there was so much potential and I really wanted to like this one.

The first problem was the casting in two of the leads.  As the father Carlos Mencia, despite his comedic talents, lacks the acting chops to make his character fly in the dramatic scenes.  The role screamed for George Lopez, who would’ve elevated the whole film.  In addition, there is no real chemistry between Ferrera and Lance Gross, who plays her intended.  This lack of spark permeates the whole film.  They seem as uncomfortable together, as their families are, with them being together.  The one standout in the cast is Anjelah Johnson, as America’s quick-witted sister.

A script, that drops the ball at key moments, is the second frustrating issue with the film.  Akin to telling the lead-in but never delivering the punch line, far too many comedic opportunities are set up then missed.   There is a potentially hilarious build-up of the Taye Diggs character and his whipped relationship with his wife that is then inexplicably dropped.  Despite featuring prominently in the trailer, Diggs is only onscreen for this one three-minute scene and then is never seen again.  There is also no set-up to the cake shop scene with Whitaker and Regina King just suddenly throwing cake at each other for no reason.  I would have preferred to see some kind of stuffy exchange with the shop owner as an explanation for why these two characters destroy her shop.  As is, it comes off as just a forced attempt at lightheartedness.  In addition, a potentially funny scenario with Mencia wrestling with Whittaker’s hi-tech bathroom gadgetry is also just dropped before reaching a conclusion.   As for the silly goat scene, that whole cheesy scenario would have been better left on the cutting room floor!

Written by Rick Famuyiwa, who also directed and Malcolm Spellman from a story by Wayne Conley, this script needed a script doctor before going before a camera!   Weddings and the conflicts that occur between families are a universal theme.  Just a couple of tweaks would’ve made this a much funnier film with more universal appeal.  As is, “Our Family Wedding” doesn’t really work which is unfortunate, because it really could’ve been a major hit.

What’s wrong with this picture?