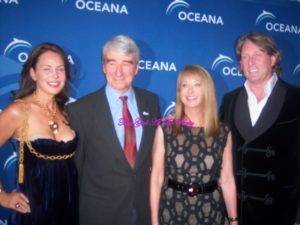 Even more urgent than health care, the economy, and any of the other pressing issues facing us today is the rapid deterioration of our environment.   For even if every American is gainfully employed and covered with full insurance and we were to somehow completely end all wars and eradicate all forms of racism and sexism throughout the world, none of it would matter if we continue to destroy our eco-system!   While Life will continue in some form, humankind would simply cease to exist, perishing and re-emerging as something completely different.   Thus, any organization that is fighting to preserve our environment is, top of my list, as one to support.

Oceana has taken on the monumental task of protecting the world’s oceans.  It is the largest international organization focused 100 percent on the fight for healthy oceans and sea life.  With a team of marine scientists, advocates, economists, and lawyers, Oceana drafts and wins concrete policy changes to eradicate pollution and save fish, marine mammals, and other sea life.    Current successes include initiatives to protect more than 23,000 square miles of deep-sea coral spanning from North Carolina to Florida from destructive fishing gear, passage of the Shark Conservation Act of 2009, which strengthens existing laws against shark finning, a ban on krill fishing in the US Pacific, and the UN designation of June 8 as “World Oceans Day” after a sixteen year push.

January Jones, Sam Waterson, Pierce Brosnan, Kelsey Grammer, Ted Danson, and over 300.000 members and e-activists in over 150 countries are currently signed on to this very worthy cause.   I ask that every TGATP reader join as well at:  http://www.oceana.org/north-america/home/