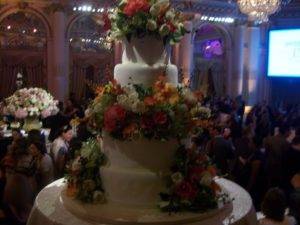 As none of my many attractive Socialite/Society Writer comrades seem to be coupling, (for the most part, regular party scene guys totally suck! I can only think of one guy I even moderately find attractive!) the 15th Anniversary of Martha Stewart Weddings Magazine seems to be the closest I will be to a real NY Plaza wedding, any time soon!  This event, was as expected for a Martha event, done perfectly!  Held in the Plaza’s Grand Ballroom and designed by Matthew Robbins of Matthew Robbins Design, it featured numerous food stations including ones from the Plaza and Ichiban, which was dishing out the best Peking Duck I have ever had!  The piece de resistance was the sushi station from my favorite Iron Chef Masaharu Morimoto, (who by the way, I felt got robbed this week on the show in his matchup with Anthony Amoroso)!   The sushi line was almost to the end of the hall as some rude quests, seemingly oblivious to the growing line, stood transfixed in front of the sushi chefs and continually stuffed their mouths at the station instead of taking a few pieces and moving on!  Fortunately, a word to the Plaza captain got the line happily moving again!  Another adorable touch was a dessert table loaded with sweets of every type in pink provided by Amy Atlas, the go-to gal for sensationally beautiful sweet tables.  I positively love her work!

The entertainment was GDO Soul featuring Greg Denard, who were the wedding reception band for Paul McCartney’s ill-fated marriage.  GDO Soul gives new meaning to the term “wedding band”!  They were absolutely incredible; seamlessly segueing from more obscure funky jams like Prince’s “Sexy MFer” and Sebastian’s “Mighty Real” to more generic fare, like Bon Jovi ‘s “Living on a Prayer”!   There was also amazing music in the hallway from The Hudson Project a band fronted by an urban vocalist/beat boxer, and two electric violinists!   It was just a completely swell time!  All that was missing was a wedding favor and a newly hitched couple running off while being pelted with rice!  (This concept has always been a mystery to me.  It’s like the guests are stoning the bride and groom after they get hitched!  Is this cynically implying that marriage equals death, so we should just put the couple outta their misery??) Next year it might be a fun twist to have a Weddings staffer actually get hitched and invite their guests and family, as well as, the other guests as this felt so much like a real wedding!