On Your Screen, TGATP Art and Culture, TGATP Screen
December 21, 2011
by That Girl At the Party
0 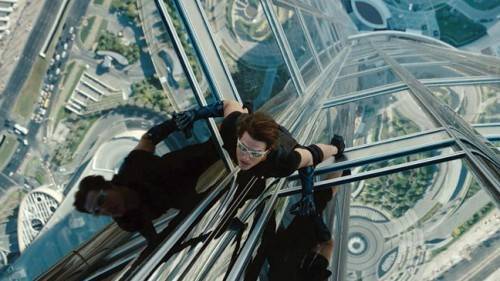 Mission Impossible: Ghost Protocol is the best action film of the year and the very best in the whole Mission franchise.  I skipped Mission Impossible III because II with Thandie Newton was such disappointing dreck.  But I was blessed to see this one at a NY press screening in IMAX and boy, was it AWESOME!  From start to finish, I was riveted and it was the rare instance where my fellow movie reviewers were audibly pleased throughout.  The story is engaging, the action is non-stop, and Cruise is at his hottie best.  I don’t think anyone has ever worn a suit better than the Navy Hugo Boss one he sports in one scene!  Tom, you look maah-val-lous!

The mission:  Stop a wackjob terrorist from starting a war between the U.S. and Russia while under Ghost Protocol.  In other words, the mission is to take place without the support of the US or Russian Governments, who think that Ethan (Cruise) and his team are the villains.  His team:  the sizzling Paula Patton (did she clone that baby?), riotous Simon Pegg, and the Steve McQueen-like Jeremy Renner,  in his first major action flick since the “Hurt Locker”.  Renner is so great I would love to see him in his own action franchise while Pegg brings that wry humor that the world loves the Brits for.  I also love that Paula Patton, unlike Thandie Newton before her, is both kick-ass and hot.

IMAX is positively the way to go with this one.   Best known for TGATP‘s favorite Pixar film “The Incredibles”, Director Brad Bird brings the same unique creativity to live action that he displayed in animation.  He pulls out all the action stops with massive explosions, a car chase through a sandstorm, and a scene with Cruise hanging off the 130 story, Burj Khalifa in Dubai that had me literally experiencing vertigo.  There is also a fight scene in a parking garage that is one of the most imaginative ever filmed.   The power of brains over gadgetry is also celebrated.  With the gizmos constantly malfunctioning, the team has to rely on smarts to save the world which is a nice and different touch.  The only thing lacking, from a chick flick perspective, is a love scene.  I mean, you’ve got two of the hottest actors in the world together.  I really would’ve loved to have seen more than a mere kiss between Cruise and Patton.  And a note to the writers:  the Ethan wife thing is just lame!  Action heroes are hotter if they are free, like Bond.

Your mission this Christmas is to see this movie.  Choose to accept it!

Sisters The Other Movie Opening This Weekend