Featured Items, TGATP People We Think Are Cool
March 24, 2016
by That Girl At the Party
0 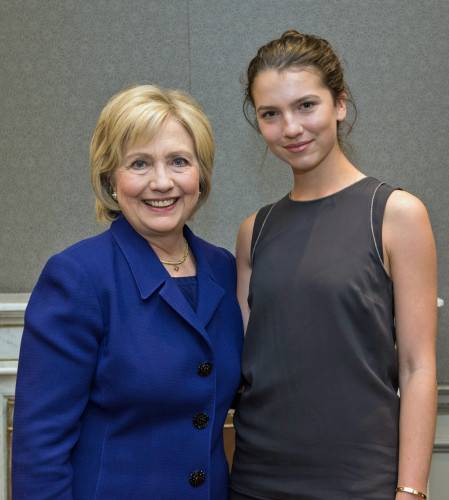 Maya Henry, daughter of high-profile attorney Thomas J. Henry, is putting her expansive social media presence to use in supporting the Hillary Clinton 2016 Presidential campaign. Using the hashtag #teensforhillary, Maya hopes to mobilize her 18,000 Instagram followers in support of the Hillary Clinton campaign and to bring awareness to issues involving female empowerment and opportunities for Latina America women. Maya is taking to heart former First Lady and Presidential Candidate Hillary Clinton’s opinion that “No child shall grow up in the shadow of deportation”. Maya sincerely hopes that when Hillary Clinton is elected president, many other young women will have the opportunities Maya and her family have been afforded.

Maya Henry is a third generation Latina-American and her respect for her heritage is a big reason behind her drive to see Hillary succeed with her 2016 campaign for the White House.

“Growing up, I always knew how lucky we are that my grandmother had the opportunities that she had and was able to provide those opportunities to my mother and to me. I believe that with Hillary as President, we will only see more opportunities for Latina Americans.” Maya states. Although she is not yet of voting age, Maya Henry has been highly supportive of the Hillary Clinton campaign since 2015, wanting to contribute in any way possible.

“Maya is a remarkable young woman,” her father, attorney Thomas J. Henry stated. “She has been volunteering for the Hillary campaign and was truly moved by what she perceives to be a woman who can make big changes for America.”

Maya has had the opportunity to meet Hillary Clinton on several occasions. Most recently, the Henry family attended a Hilary Clinton campaign fundraising event in Manhattan on Wednesday March 2nd, 2016. She encourages all those who are of voting age to get out and #voteforhillary. She also hopes her own political activism will show her peers that even if you aren’t old enough to vote, you can still make a difference. She strongly encourages teens to use their social media reach to spread Hillary’s message of opportunity and hope.

“For all my friends, both living inside the United States and abroad, I urge you to use your social media presence to support Hillary. Each of us have a huge reach through Facebook, Instagram and other social media. With simple communication through these platforms we can help to ensure children don’t live in the shadows of deportation or poor or no healthcare, and that they get a fair chance at an education in this, the wealthiest country on the planet,” she concludes.

Celebrating Jesus Christ and His Words