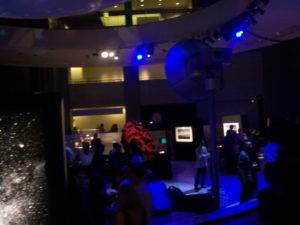 Louis Vuitton celebrated the 40th anniversary of the first Lunar landing with a marvelous fete in the Rose Center for Earth and Space at the Natural History Museum.  Tons of stars were in attendance including:  Estelle, Bryant Gumbel, Lance Bass, Miranda Kerr, Adriana Lima, and Deborah Norville.  I also met current NY Police Commissioner Raymond Kelly and Stylist to the Stars, June Ambrose.

But the men of the hour were Astronauts Buzz Aldrin and Jim Lovell.  I literally got goose bumps to be in the same room with these two space legends!  (I was very annoyed that many of the young journos in the room didn’t know who they were!  I mean really!  These two are LEGENDS!) For anyone who is reading this and doesn’t know, Buzz is an American hero and has achieved some truly outstanding achievements in space exploration.  On the Apollo 11 mission with Neil Armstrong, he was the second man to walk on the moon on July 20th, 1969.  Buzz developed the docking and rendezvous techniques that are still used by US spacecrafts.  In addition, he created the underwater training program that simulates zero gravity to teach astronauts how to spacewalk.  He currently runs Starcraft Boosters, a rocket design company and the ShareSpace Foundation, dedicated to advancing space education and exploration, and to making space flights affordable for everyone.  In addition, Buzz has a line of clothing and products called Rocket Hero.  Magnificent Desolation, his autobiography was released this June.  Buzz Light-year, from “Toy Story” is named after him.  I adore Buzz and his lovely wife Lois, who I first met at the launch of his Omega Watch.  They are just really wonderful people.

Jim Lovell is the extraordinary astronaut who commanded the ill-fated Apollo 13 mission that almost resulted in disaster.  The third manned mission by NASA that was intended to land on the moon launched on April 11, 1970.  But two days into the trip, an explosion caused a loss of both electrical power and the failure of the astronauts’ oxygen tanks.  Lovell famously reported “Houston, we’ve had a problem” and millions of Americans were nervously glued to their televisions waiting for Lovell and his crew to make it safely home.  Lovell’s levelheaded heroics were instrumental in them making it home.  Richard Nixon awarded the Presidential Medal of Freedom to Lovell and the entire crew.  “Apollo 13,” a highly acclaimed 1995 film directed by Ron Howard, featured Tom Hanks as Jim.

Interestingly, much has been made about the number 13 as a bad omen for the mission.  There were tons of eerie coincidences.  First, the individual numbers of the date of the launch  “4-11-70” equals 13.  Then the explosion took place at 5:13pm and ground estimates were that repairing the damage would cost $13 million.  No other manned spacecraft has been numbered 13. 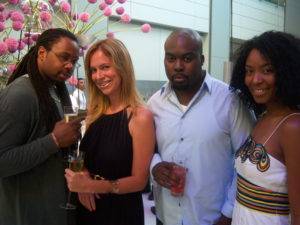 Pestos with Panache By Lauren