The best Marvel movie of all time, Black Panther is also the most important Black film ever made! Uplifting, action-packed and poignant, the film addresses the historic key dilemma in black activism against oppression in an interesting and challenging way. It’s the 60’s Malcolm X vs Martin Luther King, the Black Panthers vs. NAACP discourse that still rages today. As we watch police murder black people and the community still struggle in this racist world, should we really keep going high, when they keep going low? Is this really working as a strategy? Or should we meet fire with stronger fire. Bringing themes of unity, ancestry, and love to this age old discussion while still delivering kick-ass Marvel action, this film wins on all counts.

Ryan Coogler, of “Fruitvale Station” fame, knocks it out of the park with outstanding acting and perfect casting in every single role, a Shakespearean plot with thought provoking depth, strong female leads in aspirational roles and bang up action scenes. Chadwick Boseman, my fellow Howard alum, who I have loved in every film he has ever done, is perfect as T’Challa aka “Black Panther.”  Black Panther is the most well-written, character establishing Marvel film. The riveting plot revolves around T’Challa’s ascendance to the throne after the murder of his beloved father. There are uncomfortable discoveries about the ways in which his father’s secrets and decisions have affected the kingdom of Wakanda and oppressed black people worldwide, which change T’Challa forever.

Killmonger is a a complex, not cartoonish villain, and at times the audience will side with his thinking, if not his methods. The many layers of his character were a welcome change from the one-dimensional villains of Hollywood yore. When I first saw Black Panther, I felt that the one weak spot was that Killmonger was not villainous enough. His anger at the murder of his progressive father and the lack of assistance from Wakanda, for oppressed people of color worldwide, is warranted. Every activist faces moments when we question whether we can continue to advocate for peace when people are being murdered. However, on subsequent viewing, I realized that Killmonger represents the worse in us. He is the embodiment of giving up hope and adopting an “eye for an eye” mentality. But as Gandhi said, “An eye for an eye will just leave all of us blind.”

It is also wonderful to have female characters that actually resemble us. Lupita Nyong’o as “Nakia” is the intellectual activist and T’Challa’s love interest. Danai Gurira as “Okoye” is the kick ass, not taking no mess, but rooted in tradition gal. Angela Bassett as T’Challa’s powerful and loving Mom. And Brit newcomer Leticia Wright shines as T’Challa’s sassy little sister Shuri, who is a razor sharp tech gal. These women represent the best types of black womanhood. I have been all of these gals at different times in Life, so I adore every single one of them! This is a very welcome change from the usual head rolling, sass talking sidekick roles that we are used to black women being hoisted into. I was particularly glad that Nakia was not portrayed as she was in the comic series. Instead of a clingy unrequited love interest, Nakia is rewritten to be a powerful agent for change. The tables are turned for the screen with T’Challa far more interested in putting a ring on it and making her his Queen than she is in taking on that role in his life. Nakia is too busy uplifting her people to sit on a throne! I could watch Forest Whittaker read a phone book and am a new fan of “Get Out” star Daniel Kaluuya, so I was happy to see them as part of the ensemble. In addition, hunky Winston Duke is pitch perfect mixing humor and strength in his film debut role as the mighty Wakandan warrior, M’Baku. My one caveat is the rumored shying away of casting light-skinned Africans. I hope that this will be remedied in the sequels. We come in a multitude of shades and some of our greatest leaders, especially from the original Black Panthers – Huey Newton, Kathleen Cleaver, Angela Davis – are all light skinned African-Americans. Let’s not forget that. 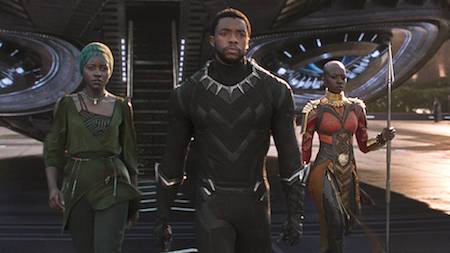 While everyone will love Black Panther, the importance of this film for African-Americans –  living under a now out and proud, white supremacist regime – cannot be underestimated. We have never had a mainstream film that portrayed us as both dignified, proud, family oriented and smart. (TGATP Note: There have been bio pics such as “Hidden Figures” , “Selma” “Malcolm X” and “Marshall”. I am speaking of mainstream blockbusters.)  The new black greeting is “Have you seen Black Panther?” followed by a Wakanda chest pound between those of us that have. I have seen the film twice and am ready to go a third time. Each time, I feel more invigorated and ready to tap into my inner superhero and fight harder for the change that needs to come. For black Americans of every age, who face racism and a loss of identity on a daily basis, Black Panther is not just a film. It’s a return and reaffirmation of our greatness and a call to action. I get teary-eyed just thinking about the importance of “Black Panther” to black children and adults alike. Wakanda now! WAKANDA FOREVER!

Relaxing In A Sanctuary Of Wellness With Cygalle Healing Spa

Pandora Shine Is Oh So Lovely