First a creepy stalker, now the first libelous statements against me; I truly feel like a celebrity abet without the money!  (I now know, how the Brangelina feel with these publications just making up stories!)

Yesterday, blog spot Jezebel, a subdivision of Gawker, ran an unsubstantiated piece in which they claimed that Ann Taylor Loft had bribed online media publications with gift cards in exchange for coverage.  Titled “Fashion Bloggers Run Afoul of New FTC Rules?” and written by a blogger named “Jenna,” the piece included numerous falsehoods and should never have been allowed to run as it was totally unverified.  Firstly, the event was separated into two with one hour from 4 to 5 for bloggers and another 5 hour event for press and buyers.  I was invited by my friend and colleague to the latter event.  Unlike, the invite mentioned in the article that included a special offer to bloggers with a mystery amount on gift cards of up to $500, the invite my friend received made no mention of a gift card incentive to cover the event. (see below). 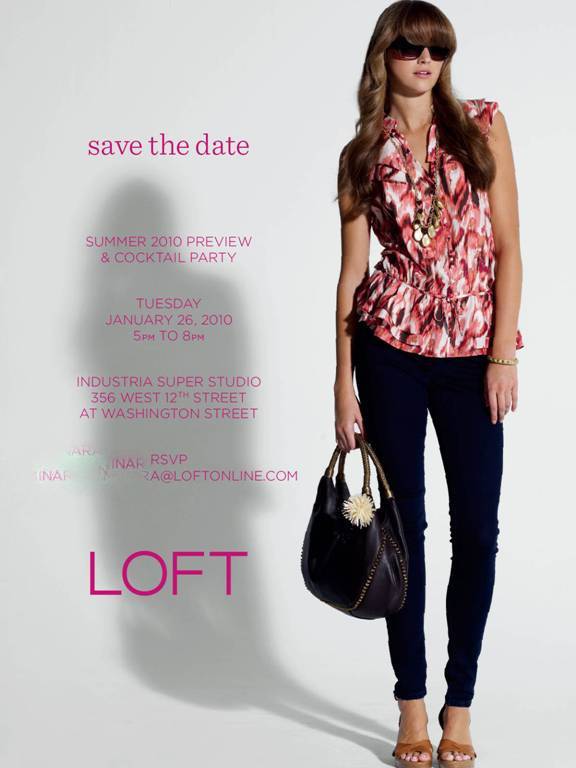 It was highly presumptuous of Jenna and the editors at Jezebel to assume they knew how people came to be at this event and to lump all bloggers in attendance as criminals in violation of FTC law!  In my e-mail exchange with her, Gaby Darbyshire, the attorney for Gawker,  tried to play down the seriousness of these false claims by illogically stating that TGATP’s inclusion in their article does not imply that I was one of the bloggers who received the aforementioned card.  In that case, why exactly was TGATP mentioned at all?  Is Jezebel in need of more links?  If I wrote a piece about websites that suck and referred to Jezebel, wouldn’t any logical reader infer that I felt that Jezebel sucked?  The mere mention of TGATP under the headline implies that I, along with the other sites quoted, received a gift card in exchange for a good review.  The problem is, that nothing could be further from the Truth.  While I cannot speak to whether the other bloggers quoted in the article received the gift card in exchange for their coverage, I assure my readers that I did not.  I arrived at the event at 7pm, a full two hours, after the blogger event had ended.  I didn’t even know about a gift card incentive as evidenced by the fact that I posted my review this past Monday, February 1st, five days after the event and four days past the deadline to redeem the gift card!  I wrote about this event because I genuinely had a blast.  Since there were two events, it is highly possible that some of the other quoted sites also did not receive a card.

The more serious issue than whether bloggers are receiving incentives is Jezebel’s motives for running this story and whether bloggers should be able to go to press with stories, such as this one, that they have not bothered to verify.  For example, the Jezebel article states “We did not attend.  Thirty-one bloggers did; the company president said that each took a gift card.”  If this Jenna did not attend, how does she know exactly how many bloggers attended and who received a gift card?  I’m sure that Ann Taylor Loft did not divulge that information.  In addition, unless she is also moonlighting as the Ann Taylor publicist, she has no way of knowing which of the bloggers that she quoted, and thus implicated later in her piece, actually even took part in the gift card offer.  For this article to be accurate, only the bloggers that Jezebel could prove got gift cards AND redeemed them in exchange for their positive coverage should’ve been mentioned.  If their erroneous inclusion of TGATP is any example, there were probably other online publications quoted that were not invited via the blogger incentive invite.

But the most glaring  major inaccuracy at the center of Jezebel’s story is that Ann Taylor bribed the bloggers who received the gift card into posting positive reviews by having them post their story before they could redeem the cards.  I spoke to someone, who did actually receive the gift card, and there was no stipulation that the blogger had to write the story first.  In fact, this person simply called the number on the card to redeem it without even doing a story.

One blogging colleague has speculated that the whole article is simply an attempt on the part of Jenna and the editors of Jezebel to try to make themselves out to be something other than bloggers themselves and to discredit other online publications through unsubstantiated lies.  It was just pure lazy journalism and/or malicious intent to have run this story loaded with false assumptions and wink wink inferences of possible FTC illegalities.  These tactics are illegal and libelous and only serve to create an unneccesary negative atmosphere for the blogging community.  We, as online writers, especially those of us with our own sites work very hard without monetary compensation.  And most of us, unlike the folks at Gawker and Jezebel, do not have major investors yet or trust funds that allow us to run our online publications for a living.  Thus, our journalistic integrity is our most cherished asset.

Until this incident, I was a fan of Gawker/Jezebel.  But with them so off base in this article and refusing to take me out of the post even when they were proven to be wrong, it calls into question how many other inaccuracies they report, completely destroying their credibility.

What's wrong with this picture?

That Girl At The Party Superbowl Party Recipes