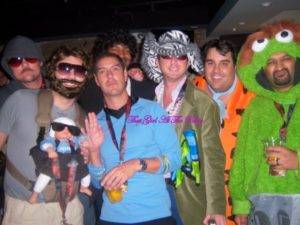 There is no better place in the world to spend Halloween than NYC!  The legendary NYC Halloween parade is always followed by raucous parties in every city bar and club that spill out into the streets till the wee hours!   I was invited to spend this year at the Jagermeister Halloween Party at the new West Village hot spot, Amity Hall (80 West 3rd St. b/t Thompson and Sullivan).  Having never been to the space, I was expecting a crazy, overcrowded club vibe with the usual mess at the door, like the YSL Parisenne Party on Thursday.  But I was very pleasantly surprised as we were warmly and quickly escorted in and the venue was far smaller and intimate than I had imagined, with two levels and the perfect amount of partygoers!  It was the perfect combination of a lounge party with a house party feel.

I am always breaking out in peals of laughter at the clever ideas that people come up with for their costumes!  This year’s favorites included a Jimmy Dean Sausage Girl, a bag of leaves, a loofah, Thing 2 from “The Cat in the Hat”, a Blowup Doll, Homie the Clown, and Edna E. Mode from “The Incredibles.” Also highly amusing were eight friends who all dressed in the same Elvis costume and an interracial couple, one of whom depicted Michael Jackson during his Thriller era, and the other in his later, and far more, light-skinned days. 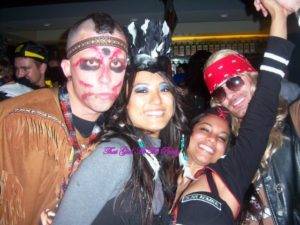 Hot guys in costumes are always a Halloween plus!  Chef and mixologist, Ryan Scott made a very sexy Jim Morrison and there was a gorgeous boy with a body to live for doing Wolverine. An prowling, Navy uniform clad guy came up and told me how much he was turned on by my pirate wench costume.  Always a staunch supporter of our troops, I couldn’t resist a flirtation with hm.  But I’m sure his line about “shipping out for real in a week’s time” was, just that, a line.  Hope it worked better for him on some less savvy party gal then it did on me!  Amused myself by imagining if the people who were hanging together really were the characters they were portraying.   For example, picture Elvis and Michael Jackson hanging out with Jim Morrison, Princess Leia, Beethoven, Homie the Clown, Spock, the Unabomber, a pimp and a blow-up doll!   Towards the end of the party, the DJ announced that our beloved NY Yankees were winning 8 to 1, which elicited cheers from the well Jagermeister lubricated crowd.

By picking the perfect venue and a great mix of fun hot folks, the event planners scored a real home run with this one!

The HTC Pure - My New Office on the Go