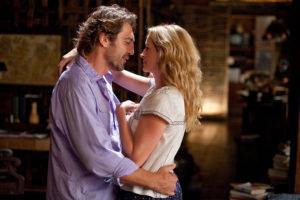 Three years ago, my world was falling apart around me.   My lawyer/manager had allowed a lowlife production company that he had forced me to sign with, steal my TV project.  In addition, in spite of crazy tolerance and allowances on my part, my latest affair was ending badly.  It was at this time that I picked up Eat Pray Love after seeing the book’s author, Elizabeth Gilbert interviewed on Oprah.  I will admit it was, at first, hard to totally relate to Elizabeth.  It seemed silly that she had EVERYTHING – a hubby who adored her, a new home, a thriving writing career – and was so deeply unhappy.  Hell, there were (and are) so many woman going through major issues, like poverty, unemployment, domestic abuse, chronic singledom  and more, that it seemed ridiculously self-centered of her to be unhappy.  Despite her major melancholy, Gilbert was lucky.  She didn’t have a real problem just a love that had grown cold.  And It wasn’t even a case of unrequited Love.  it was on Elizabeth’s end, her man wanted to stay!  Most women go through far bigger dilemmas in Life than which hunky man to be with next.  And most women, can’t afford to jaunt around the world while they figure it all out.

That said, once you get past the “rich White girl angst” and the seemingly trite reasons for her spiritual quest, Eat Pray Love is a universal tale of spiritual growth and I ultimately found great comfort and kinship in Gilbert’s words.  I began to realize that no matter how much or little we have, we will always strive for something other.  Every human (if she/he is lucky) will have that time in Life, will feel a jolt that says that she/he will need to get her/his spiritual self together.

As I continued to devour her words, I began to feel a kinship with Gilbert.  In my twenties, I had experienced a sort of “eat, pray, love” of my own, dropping it all and heading to Italy with just $300 in my pocket.  After two years in Italy, I ended up living in London for another four years.  I, however was too young to really appreciate or truly grow, in any way, but culturally.  Very little “praying” went on and I mostly just focused on the “eating and loving” part!  Our final connection was her description of her bad relationship with the boy (I dare say, man), who was the final impetus for her journey.  He reminded me of the boy-child, that I was going through the final throes with at the exact same time as I was reading the book.  Once I finished it, Eat Pray Love became a favorite go-to tome for a quick spiritual uplift.

Thus, it was with great anticipation that I awaited this film.  Fortunately, it did not disappoint.  I absolutely LOVED the cinematic adaption of Eat Pray Love!  Julia Roberts was perfect as Elizabeth bringing a believability to both her ups and downs.  She played it with a subtle grace and it was a rare treat to see the many dimensions of this wonderful woman played out on screen.  A testament to Roberts’ talent, her onscreen portrayal brought Gilbert to life in such a way that you stopped caring so much about the “whys” of Gilbert’s journey and simply enjoyed the journey itself.  The ensemble cast was amazing.  Viola Davis is her usual standout self in the role of Gilbert’s dearest friend and all of the guys are just wonderful, especially Richard Jenkins.  James Franco is perfectly cast as the angst-ridden but charming younger beau and Javier Bardem brought tears to my eyes as Felipe, the man who ultimately frees Gilbert’s stone cold heart.  The locales are so stunning that I just wanted to get on an immediate plane!  (I definitely intend to seek out the pizzeria when I hit Italy this fall.)

The only issue I had with this film is that it was badly edited in places and far too long.  While all of Bali was paced well, there were moments in both Italy and India that became a bit boring,  I also recommend the film as a companion to the book.  So if you have not read the book, please read it very quickly then run out and see this adaptation. Or, if you read slow, (movies seem to be here then gone so quickly these days!) you can see the film and read the book after.

A fun note: I am currently practicing the Smile Meditation that Ketut taught Elizabeth, which is amazingly healing.  Simply imagine all the various organs of your body actually smiling.  It is soooooo relaxing.  Do it anytime you need a breather.