There were a number of factors that created my excitement for this film. First, the choice of Ava Duvernay, as the first black female director, for a mainstream Disney film. I love Ava and anything she does is top of my list. Secondly, I was thrilled that she filled the cast with multi-racial talent, including my fav gal Gugu Mbatha-Raw. (I interviewed her back when she starred in “Belle”). The casting of hunky Chris Pine, as Gugu’s husband, was also cause for celebration. Thirdly, I am going through one of the most trying times in my Life. So I am up for anything that has a spiritual message right now. And lastly, Oprah is in!

But, unfortunately, “A Wrinkle In Time” did not deliver. There are a number of problems including a muddled, story that never quite gels and under developed characters. Since I came to the film without having read the books, I needed more backstory. It made no sense why the father was trapped in the dark reality simply called “The It.”  The whole visit to the It or dark reality was odd and unexplained.  Set up to be a creepy, the cameo by Bellamy Young was wasted and ultimately went nowhere. 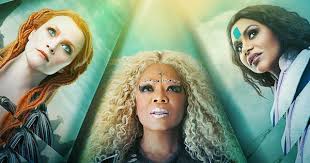 My other issue was Reese Witherspoon as “Mrs Whatsit”.  The young heroine, Meg (wonderfully played by Storm Reid) is already being bulled at school. I found Whatsit’s constant negative talk and eye-rolling at Meg off-putting and not uplfiting. Even when Mrs. Whatsit gives Meg a supposed gift, is still treating her negatively in the end. This is particularly glaring as a black woman as we are forced to watch a white woman treat a young black gal badly. I was surprised that Ava was not more conscious of how this would be received. Oprah is great but is never not Oprah. Her personality is now too large for me to be able to watch her in a film and disassociate the character she is playing from her real-life persona. Here she is basically cast as Goddess Oprah.

I also did not like the constant flirtation between Meg and Calvin, who are supposed to be 11 or 12-years old! It was a little too much for kids that young to be shown exchanging lingering looks and almost kissing. This would only have been appropriate if they were portrayed as at least 16! 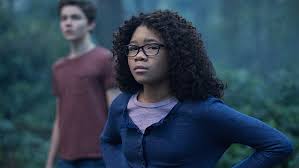 And finally, the spirituality was too watered down and basic. I spoke to some of the moviegoers at the promotional screening I attended. They said that a lot was missing from the Madeleine L’Engle’s 1962 novel that the film is based on and they were filling in the plot holes with their knowledge of the source material. They also mentioned that the Christian foundation of the books had been removed, which explains why the deep spiritual message is so lacking. I wish that Hollywood was not always running from all things Christian, like this.

While “A Wrinkle In Time” is visually stunning and features great acting from Storm and Derek McCabe, who plays her little brother Charles Wallace, I was mostly disappointed.