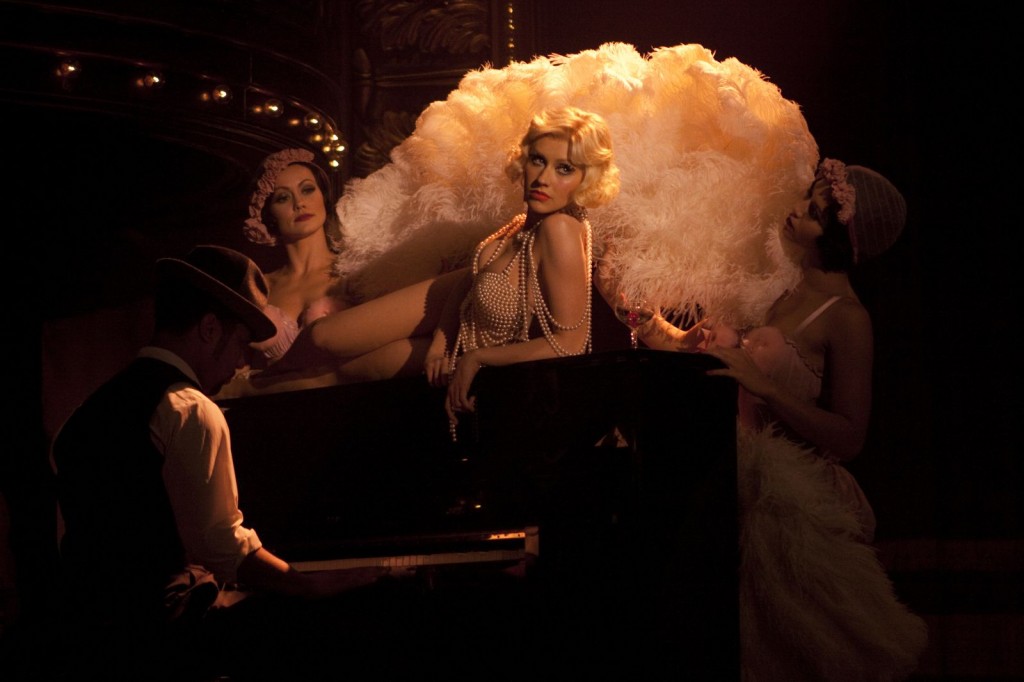 (Spoiler Alert:  In reviewing this film I have given away a couple of plot points.)

Burlesque is Summer Stock crossed with Flashdance with some Showgirls thrown in for good measure!  Thank God, for the dazzling vocals from Christina Aguilera, the sheer likability of Stanley Tucci, the sexiness of Eric Dane, and the magnetic screen presence of Cher (although her face has become a cautionary Botox story!). They turn what could have been an utter hot mess – due to an overly bitchy and corny script, amateurish TV-style lighting and direction, and horrific acting by the love interest – into a less hot mess of a film.

Ms. Aguilera, in a role reminiscent of zillions of movies from the 30’s to the present, plays Ali, a fresh off the boat farm girl who lands in Hollywood and stumbles upon the local Burlesque club.  (Her arrival is so cliche  that I was waiting for her to have only a pair of dancing shoes in her suitcase!) At first relegated to waitressing, she is awarded a spot in the show when she coaxes the club owner Tess, played by a spot on Cher, to give her an audition.  Once she displays her amazing vocal talents, she becomes the star of the show.  There is, of course, the standard rivalry between Ali and Nikki, the previous headliner, played by Kristen Bell.   In addition, leaving no movie cliche unwritten, Tess is on the verge of losing the club and being aggressively pursued for her place by Marcus, a strictly business minded developer played by Dane.

There were some staggeringly campy moments that were cringe worthy and sent the audience into unintended fits of laughter.  Cam Gigandet, who played Aguilera’s love interest Jack, was so awful that it was embarrassing.  The two lacked any chemistry whatsoever because he came off too plain dumb and goofy!  Despite lust worthy abs, he reminded me of the dude, who used to play the lunkhead in all the Funicello/Avalon films from the ’60’s.  (Movieline Magazine may want to take back that “Young Hollywood One to Watch” award once they see him in this!) In addition, the Emo vibe of having him sporting eyeliner made him seem gay and more suited for a tumble with Tucci’s character.

Speaking of Tucci, his Sean was so well-played that I wanted that character to walk out of the screen and be my new BFF!   He was fun, real and lightheartedly bitchy in an endearing, rather than annoying, or bitter way.  Eric Dane is a sexy standout as the rich developer, who is trying to both buy the club and woo Ali.  Hollywood needs to wake-up and cast him in more Clooney-type leading romantic roles instead of always relegating him to bad boy supporting roles.  He was sooooo much hotter than the love interest that it made Ali’s ultimate choice unbelievable.  I also truly wish that films would stop telling women that hot and rich is not as desirable as hot but poor — it’s just not true!  As my mother used to say, “You can fall in love with a rich man, just as easily as a poor one.” Unfortunately, neither of us ever heeded her advice!  Believe me, TGATP has dated her share of hotpoor boys and when it’s over, you’re left both broke and heartbroken.  At least a dude with dosh will leave you with some trinkets and some great memories of high-end and unforgettable dates!  Any man in my future is gonna haveta be both hot AND fully loaded! Julianne Hough is a standout in a cliche role and Alan Cumming is great as a fictional Alan Cumming.

Unfortunately, the script combined with bad editing made Burlesque in parts just dreadful with scenes that lagged and a story that had no proper tension.  For example, the rivalry between Ali and Nikki was just a few traded barbs with not enough actual actions.  It would’ve been better to have developed a story there with real circumstances and consequences.  I don’t buy that Nikki would not have fought harder for a return to the spotlight and her man!  I’m sorry, but any real woman would’ve cut a bitch if she was dating Eric Dane‘s character and some girl horned in on it!  The love story was also not properly fleshed out and the romantic fall-out with Ali and Jack nonsensical.  Did he lie to her about his relationship with his fiance or not?  You never really know, which leaves you not sure if you really want them together or not, because he may be a cad!  This gaping hole in the story was inexcusably lazy.  From an editing standpoint, roughly 10 minutes could’ve been cut.  There were scenes that should’ve remained on the cutting room floor, scenes that were oddly introduced, an scenes that were not properly played out.  One particular example was a scene that must’ve read like this –  Ali is standing in the rain.  Jack sharply orders her to come back in.  They go back inside. – did we really need that scene???  The bulid-up to Cher’s big number also thumped  on to the screen.  All the sudden, she needs to “rehearse that number.” And it’s a great number, so why not have found a better way to work it into the script  One of the best scenes is the make-up lesson that Cher gives Christina, that wasn’t even in the original script.  In interviews, Cher revealed that she improvised those lines based on her own true story with her mother.  Perhaps Steven Antin, the first time writer-director of Burlesque, should have had her revamp the entire  script.

Interesting that Antin harkens from TV, because his direction, was very much like a CW TV show with the lighting too dark and too soft.  I’ve been to LA, it is not that dark.   I also would have loved to have seen the performances filmed with more energy, pizzazz, and innovative lighting work, like Rob Marshall‘s stunning work on “Chicago” and “Nine”. As is, it lacked energy and the numbers were only saved by Christina’s and Cher talents.  And the beautiful ballad that Aguilera delivers about her new love interest sees her inexplicably made-up and out of character, which was just odd.  Why not have had her perform that song in her Burlesque persona to her new man, which would have made more sense.

I didn’t hate it but I didn’t love it either.   That said, Burlesque still manages to be worthwhile fun with some “great two snaps and a head roll” lines delivered by every character.  See it, if just for Christina and Cher in performance and the brief moments you can get fantasizing about Dane‘s character. (Rebecca Gayheart is one lucky gal!) And hey, if you are a gay male you can fantasize over Gigandet.  Other than those abs, which warrant a second mention, his character is written more for you than us, straight females!

With it’s bitchy lines and OTT performances, Burlesque is sure to become a camp cult classic parodied by drag queens all over the world!  I can just see Joey Arias as Cher with Lady Bunny in the Aquliera role coming to a NY theater soon!

Give, Save, and Be Merry with Kohl’s