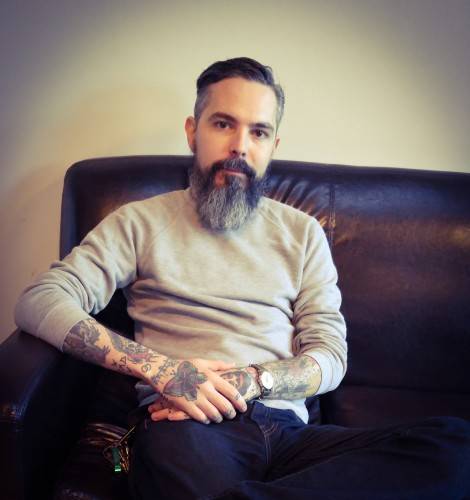 I have been a tattoo sporting gal for half my Life. I got my first one after a rock and roll night in London with my English beau, who was a lead singer in a ska band.  A tiny Yin and Yang on my left shoulder blade, I considered it the ultimate token of affection. When I got home from London, I turned the symbol into a more elaborate piece by adding a celtic armband.  I swore I would always keep it as in remembrance of this particular guy, who I used to tell people was the man I should have married.

Fast forward – twenty three years, loads more guys and musicians, five more tatts and tons of Life experience – to when I decided to reimagine the, now dated and not so desirable piece that reminded me of an equally dated and no longer desirable guy, and turn it into a work of art.

I went to my go-to NYC tattoo artist the amazing Andy Perez of  Allied Tattoo (48 1/2 Grattan St. – across from the Morgan L) in Bushwick to hook me up.  He turned the armband into a phoenix that is so beautiful, I actually get stopped on the streets and asked about it.  I wanted to share him with you because he is everything you want in a tattoo artist – a skilled artist with a kind fun nature and a light hand, which makes getting your tatt virtually painless.  Below find my inteview with Andy and some personal tips from me on the best aftercare for your tattoo.

TGATP:  What made you choose tattoo art as an occupation?

Andy:  I was attracted to it from a very young age, I still remember the very first tattoo I ever saw on my older brother’s friend Phil, it was a little hot stuff devil with Drumsticks. I thought it was the coolest thing ever! Later on after high school I ended up playing in a band with my friend Scott who had just finished his apprenticeship and who gave me my first (professional) tattoo. I was always drawing and painting and he pushed me toward tattooing. That was around 1997 or so but it wasn’t until after a failed stint in college, and a miserable few years in the music industry that I finally doubled back into tattooing.

TGATP: You just opened your own shop Allied here in Bushwick, what is the Allied motto and what do you offer clients that is distinct?

Andy: I don’t know that we have an actual “motto” although we do have “We’ve Got You Covered” painted on our window, I thought that was pretty clever when I thought of it. As far as what we’re offering, my partner Benny and I had worked in several higher end tattoo shops in Brooklyn and Manhattan in areas really saturated with good (or otherwise) tattoo shops and we saw an opportunity to do something in a neighborhood that was underserved and offer people a higher end (but not snobby) clean, fun, personal, place to come get tattooed in the neighborhood. 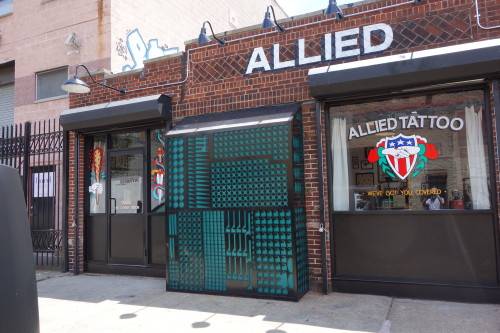 TGATP: Who are some of the tattoo artists that you look up to past or present?

Andy: Too many from the past to name. Curently though, I think my friends at Blue Arms Tattoo in Olso, are doing really, really great stuff and are amazing guys. As far as the states, I’m constantly looking at the entire crew at Atlas tattoo in Portland, and Idle Hand in San Fransisco for inspiration. Also, my friend Javier Betancourt at Ocho Placas in Miami is one of my favorite tattooers working right now.

TGATP: Is there any celeb that you would love to either tatt or redo their existing tatts?

Andy: Eh, celebrity status doesn’t really mean much to me. I’ve probably tattooed people that were famous in some circle and not even known it, I don’t keep up with pop culture stuff at all. Although I did once get to tattoo Andy Rourke from The Smiths. That was pretty cool.

TGATP: What are your craziest tatt stories?

Andy: Oh man, working in some of the places I’ve worked, I’ve had a LOT. Bullseyes on an older gentleman’s butt cheeks, the words “DO ME!” in giant red letters across a dude’s stomach, A lady’s weed dealer’s phone number right next to her lawyer’s phone number, so she wouldn’t forget them. I could go on and on. 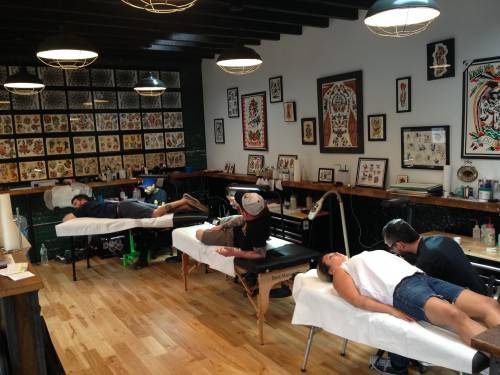 TGATP:  What should people consider when choosing their tattoo design and location for it?

Andy: There’s all sorts of factors, how visible they’d like it to be. How well the design fits with the part of the body. How certain small details might age over time. All of these things are things you should discuss with your artist, be receptive to them, they just want to steer you in the right direction, and if you trust them and listen you may end up with something that exceeds your initial expectations.

TGATP: What is the biggest mistake you have seen people make with their tattoos either in choosing a design or picking a location?

Andy: I would say work with your artist and listen to their input to avoid making mistakes to begin with. Not listening and insisting on something even though an artist tells you it would be too complicated for the size that you want it, or it will heal poorly in a certain location etc. is the biggest mistake people make. A lot of people will get told something they don’t want to hear and then just shop around further until someone unscrupulous will take their money and give them exactly what they ask for. Then they end up back at the first shop, a few weeks later, asking them to fix it.

TGATP:  Aftercare is easy but complicated. When I did mine, I found tons of different and conflicting opinions about what is best. As an expert, please tell us what the very best way to ensure proper healing is and what exact products (which soaps, lotions, a&d etc…) do you recommend?

Andy: There is no one right way to heal a tattoo, most tattooers tend to recommend whatever has worked well for them in the past. I give my clients a care sheet with a bunch of instructions on it. But when I get tattooed, I don’t do anything, so I’m a hypocrite hahaha. That said, THE SINGLE MOST IMPORTANT FACTOR in healing a tattoo is keeping it clean the first three days while the skin is still open and susceptible to infection, that means washing at least once a day, preferably with antibacterial soap. Not sleeping on dirty sheets, not drying it off with dirty towels, not wearing dirty clothes, etc…

The main cause of infected tattoos and hard heals I’ve seen though are pets. It seems like common sense but a lot of people will sleep with their dog or cat on their new tattoo. Bad idea. Past that initial healing period though, it’s more about comfort. I recommend light unscented lotions to moisturize the dry skin and relieve the itchiness. But really, with a well-applied tattoo, you could do nothing and it’ll heal just fine. In fact over-moisturizing and putting slicks of greasy ointments on it can do way more harm than good. All things in moderation.

TGATP Aftercare Tips:  I have healed multiple tatts and find the less you do the better. However, I do advocate some aftercare, especially if you have dry skin.  Here is what worked for me: