On Your Screen, TGATP Art and Culture, TGATP Screen
April 11, 2012
by That Girl At the Party
0 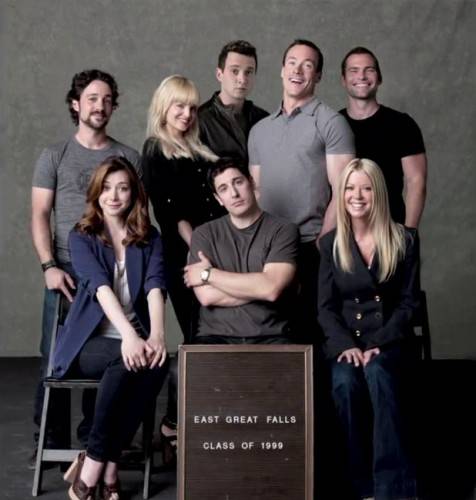 I once read somewhere that most people don’t change much from their high school years and I find that to be true.  This film rings true to that theory with all of the characters simply adult versions of their teen selves.  In American Reunion, the gang’s all back just as we came to know and love them!  Jim is still a horndog, Stifler is still goofy, Kevin is still a loveable hottie just more so, Finch is still adorable, Michelle is still the girlfriend that every boy wants to marry and Vicki is still a partygirl.  Oz is now a celebrity with a trophy girlfriend, which is a bit in congruent, with the rest of the story.  On the parental side, Eugene Levy steals the film as Jim’s Dad, who is still offering his son“talks” and Stifler’s Mom is still a lustful sex fiend.  Also returning to great comic form are  Mena Suvari as Heather, Natasha Lyonne as Jessica and Shannon Elizabeth as Nadia.

American Reunion is the perfect film to lift you out of any lingering Winter blues and get you chuckle ready for Spring.  With 13 years (gasp!) since the first one, you’ll feel like you are going to your own reunion.

Valentina, the New Fragrance from Valentino