I can’t think of anything that is more attractive on a man than a brilliant mind!  At seventeen, I was so mad for my college philosophy professor, a short squat balding man whose mind made him hotter than Brad Pitt, that I took a class by him everyday.  That is, until the kindly head of the department noted my crush and discreetly pointed out that there were other, just as capable, professors teaching philosophy at the university!

One of the amazing minds that Doc exposed his students to was the work of the incomparable, Dr. E.O.Wilson.  Dr. Wilson is one of the greatest minds of the 20th century.  A biologist, a researcher, an environmentalist, and an author, he has won the Pulitzer Prize for General Non-Fiction twice and numerous other science and literary awards.  Dr. Wilson’s views on science and religion are both revolutionary and controversial.  He does not believe in a particular God (we disagree here).  But, unlike many scientists (and Bill Maher!), who outright dismiss religion, Dr. Wilson feels that science and religion are two of the most potent forces on Earth and belief in God and religions are products of human evolution.  And thus, it is vital for scientists and religious leaders to come together to save the planet.

Dr. Wilson’s lifelong love of the planet is demonstrated through his ardent environmentalism.  America’s most distinguished and influential naturalist, he is considered the father of the modern environmental movement.  He is an avid supporter of the Act to Save America’s Forests, which will limit and ban destructive forms of logging in our national forests and require the U.S. Forest Service to protect and restore the native forest biodiversity of animal and plant species on our federal lands. Dr. Wilson is currently a research professor at Harvard University, his alma mater.   It was one of the great honors of my Life to meet him and join his 80th birthday celebration at the Opening Night Gala for the 2009 World Science Festival.  (One of the highlights of the evening was when the Abyssinian Baptist Church Choir serenaded a visibly delighted Dr. Wilson from the balcony with Stevie Wonder’s “Happy Birthday To You!”)

I also met Glenn Close, Alan Alda, Joshua Bell, James Watson, and some of the other scientists who will be at this year’s festivall.  (Unfortunately, the press dude said I was too well dressed to be press so he wouldn’t give me a photo sheet!  Thus some of the esteemed scientists on the red carpet and that I met and photographed remain unknown to me.)

The 2009 World Science Festival runs through Sunday, June 14th.  Check out their website:  http://www.worldsciencefestival.com/2008-festival for the schedule of events! 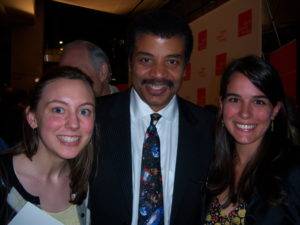