On Your Screen, TGATP Art and Culture
August 9, 2012
by That Girl At the Party
0 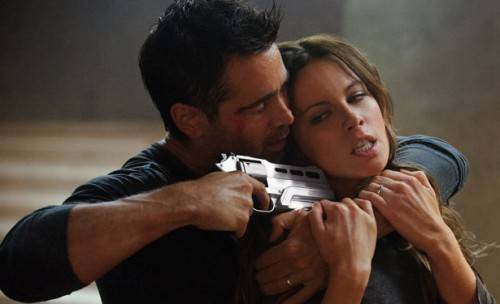 Any film that opens with a half naked Colin Farell and ends with a half naked Colin Farrell is a definite go-see in TGATP‘s book!  This awesome re-make of the 1990 Arnold Schwarzenegger film is smarter, faster, bigger, more action-packed, and sexier than the original!  Based on the 1966 short story “We Can Remember It for You Wholesale” by Philip K. Dick, the story is also more fleshed out than its predecessor and there are tons of changes.  For starters, it takes place on Earth instead of Mars, there are no mutants, and there is no threat of oxygen loss.  What remains is the basic premise of a man, Douglas Quaid (Colin Farrell), who thinks he is someone he is not and is married to  Lori (Kate Beckinsdale), who is someone other that she appears.  Experiencing dreams of another woman (Jessica Biel) and bored with his work-a-day life, Quaid goes to Rekall to try out a drug that will turn his dreams into reality and make him an imaginary secret agent for the evening.  The problem?  He may already be one.

Total Recall rocks from start to finish.  Patrick Tatopoulos’ production design is the star of this edge-of-y0ur seat show allowing director Len Wiseman to create eye-popping sequences including space car chases, pursuits through elevator shafts, and a catfight between Kate Beckinsale and Jessica Biel. There are also some real cool gadgets, like hand implanted cell phones and holographic messages.  It’s as if Wiseman and his team took The Matrix, Blade Runner, and Shoot ‘Em Up and threw them in an action blender!

Kate Beckinsale steals the show as the kick-ass, take no nonsense bitch on Quaid’s trail delivering new classic action genre lines, like “I give good wife.”  (The only problem with this character is that, after you have seen the infamous Farell/Narain sex tape, it is hard to believe any woman would willingly give him up!)  Farrell brings the perfect mix of confusion and toughness to to his part and I would love to see him in more action.  I would have liked to have seen a little more kick-ass in Biel at the onset.  But she makes up for a wimpy start with a bang-up finish.   I loved this roller coaster ride of thrilling action that was a remake finally done right.  It’s a must-see for any action junkie!

Get Naked 2 with Urban Decay!

Eat Your Heart Out Madonna, It's Gaga On the Vogue September Issue Cover!

Drive Is The First Must-See Film of the Fall!