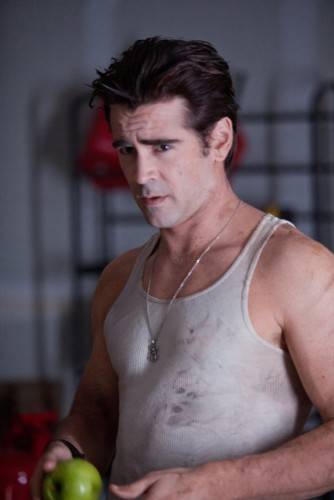 I really wanted to see this but wasn’t sure what to expect and I was very pleasantly surprised.  The remake of Fright Night is one of the rare times when the new version is better than the original!  Thanks to the menacing performance by Colin Farrell and great direction and pacing from director Craig Gillepsie, this film delivers some truly terrifying moments.  Do not expect the same horror lite that the original movie delivered; there are some really scary moments in this one.  The story remains the same –  a teenager Charlie (Anton Yelchin) discovers that Jerry, the new SWM next door (Colin Farrell), is a vampire and has to wipe him out before he consumes the entire neighborhood.  What differs is the level of suspense that in many scenes builds till the audience is perched on the edge of their seats.  Two scenes – one in Jerry’s house and the second on the highway – are particularly well done.  Screenwriter Marti Nixon, working with Tom Holland’s story,  gives the remake a totally new feel.  In this version, the emphasis is on the horror and while there are humorous moments, it is far less campy than its predecessor.  In addition, the unforgettable Peter Vincent character, played by Roddy McDowall in the 1984 flick, is rewritten as a Criss Angel-style, Vegas magician and wonderfully played by David Tennant.  As Charlie’s geek friend Ed, Superbad’s Christopher Mintz-Plase is a standout and Toni Collete is perfectly cast as Charlie’s mom.

The only disappointment was the use of 3D which was totally unnecessary and more of a distraction than an asset.  While it made the ending credits pop, most of the movie was too dark for the 3D to be noticeable.  And I’m sorry, if Colin Farrell was a vampire living next door to me, I would be feeding him every day!  What gal wouldn’t want him to bite her neck?!  Especially if you’ve seen his sex tape!  Yowza!