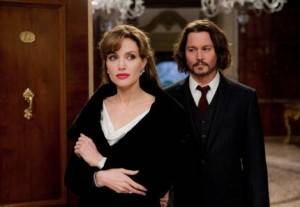 Reminiscent of Audrey Hepburn and Cary Grant’s “Charade”, The Tourist is an elegantly sophisticated caper, starring two of the sexiest stars in Hollywood.  Unfortunately, I fear, it is too subtle for the American movie going audience, who are used to bang ’em up, non-stop action.  Johnny Depp is Frank, a heartbroken math teacher on vacation in Venice.  When he falls at first sight for Elise, played by the always gorgeous, Angelina Jolie (sorry Jen and Chelsea, Angelina was DEFINITELY the hotter choice), all hell breaks loose since he is mistaken for her boyfriend, who is wanted by both the Mob and the police.

While one would think these two would be a hot mix, the problem is that that certain je ne sais quoi that makes each of them sizzle individually is only moderately hot when you put them together.  Angelina is her usual slinky super sex tigeress self and lights up the screen.  The problem is Johnny.  He’s just been too quirky in too many other films to be considered leading man sexy.  I mean, he was Edward Scissorhands, for Pete’s sake!  While there were moments of hotness from him, most notably, his kiss with Angelina, somehow the whole thing didn’t work.  My audience laughed at odd moments that were not intentionally funny.  The plot would’ve been strengthened by some more courting scenes and an actual hot sex scene instead of just one imaginary kiss.

Ultimately, the movie is a nice holiday diversion, although you can see the twist coming from three zillion miles away.  See this if you love Angelina and Johnny and do not require a large body count in your action films.