One of the best films of 2020 so far, The Invisible Man is perfect and an instant film noir classic. I can see people watching it 50 years from now in the same way we watch classics, like “Gaslight” and “Double Indemnity”, today.

With so many women suffering from abuse, the story is sometimes a bit too real. I was literally on the edge of my seat and talking at the screen –“girl no!”- abet not yelling, as I was at a press screening. 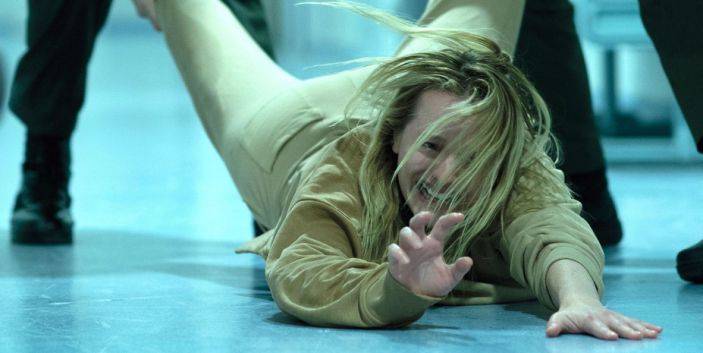 Elizabeth Moss is Oscar-worthy as the abused wife, who can’t shake her psycho, tech billionaire hubby. Every emotion she displays and every decision she makes – except leaving the dog, I could never have left a pet with an abuser – is completely believable. You feel like you know her. As the cop that takes her in, Aldis Hodge is smoking hot. However, I am glad the filmmakers did not portray the stereotypical romance between an abused woman and the man helping her. I have always found that overused plotline hokey. It plays down the effects of long-term abuse and implies a woman can just get on with another man after years of abuse. I am going to say it now. No woman escaping horrific emotional and/or physical abuse would trust another man so quickly. This is a male interpretation I am glad this film avoided and that needs to never play out on-screen again. It is also wonderful to see little Storm Reid coming into her teenage own.  as the psycho husband is terrifyingly real. Even though he is only on-screen for about 4 minutes, you can feel the menace he represents.

The Benjamin Wallfisch score is a crucial element to the film and again, I hope he is remembered next Oscar season! I stayed at the end just to hear more of it. Much like the soaring scores of last year from “1917” – which I thought should have won the Oscar and “Joker”, which did win, Wallfisch’s score is amazing.

A rollercoaster of a film, The Invisible Man is twisty, unpredictable, frightening, thrilling and smart. I loved everything about this one and you will too. While I saw this before the lockdown of NYC movie theaters, it is now on-demand and on HBO.

DK Shin Jeans Are A TGATP and Celebrity Favorite