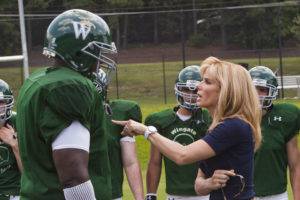 The Blind Side is one of those movies that will stay with you well after the credits roll.  Based on the book “The Blind Side: Evolution of a Game” and written and directed by John Lee Hancock, the films tells the heartwarming true story of Baltimore Ravens Offensive Linesman, Michael Oher and his relationship with Leigh Anne Tuohy and her wonderful family.  The product of a crackhead mom and an absent father, Michael was a virtually homeless, barely literate teenager.  By the hand of God, he ended up going to school with the Tuohy’s children.  When Leigh Anne discovered his predicament, she moved him into her home.  While Michael was academically challenged, he displayed a real talent for football so the whole family rallied to nurture his gift.  The Tuohy’s ultimately adopted Michael and he went on to be on the honor roll in college and then to the NFL!

Sandra Bullock puts in an Oscar-winning performance as the Southern force of nature that is Leigh Anne!  She is a no-nonsense, take-no prisoners kind of woman with a heart of complete platinum.  I fell completely in love with her.  Her decision to take Michael in is portrayed, not as some long thought out process, white guilt, or pandering for a societal pat on the back, but as a pure extension of who this woman really is.  She simply does the right thing because there is no other thing that she would consider doing.  Michael is never treated as a victim or less than an equal by Leigh Anne, her husband Sean, wonderfully portrayed by Tim McGraw, or their children.  He is just another family member. The story is poignant without being sappy and tugs at your heartstrings in a real honest way.  Even Sean’s proclamation later in the film that they are Republicans cannot tarnish one’s opinion of the Tuohy’s!

As Michael, Quinton Aaron brings a quiet credibility to the character.  Unlike the characters in that hot mess of a movie, “Precious,” (somebody should’ve been slapped by the ghosts of our ancestry for that one!), he is not a ghetto stereotype and plays his part with a     nobility.  His scenes with Sandra are totally believable and he more than holds his own.   Kathy Bates is well, Kathy Bates, as Miss Sue and Ray McKinnon brings in a great comedic turn as Coach Collins.  And as SJ, Jae Head is one of those smart-ass movie kids that I just love.

The only teeny tiny criticism I have about the film is that all of the women of Color are portrayed negatively.  From Michael’s crackhead mom, who has 12 kids and doesn’t remember who his father is, to the head-rolling teller at a welfare center to the NCAA investigator, there is not one good Sista in the whole film!  While this is very subtle to most viewers, it is coming on the heels of two cinematic hate crimes on Black females, in the form of “Good Hair” and “Precious”.  So I hope that this is not going to be a continuing Hollywood trend!

That said, the story is so wonderful and the movie is so beautifully done, that I alternatively wept or smiled the entire film.  Hell, I burst into tears again just watching the trailer again for this post.  Definitely see this!  The Tuohys are an inspiration to us all!