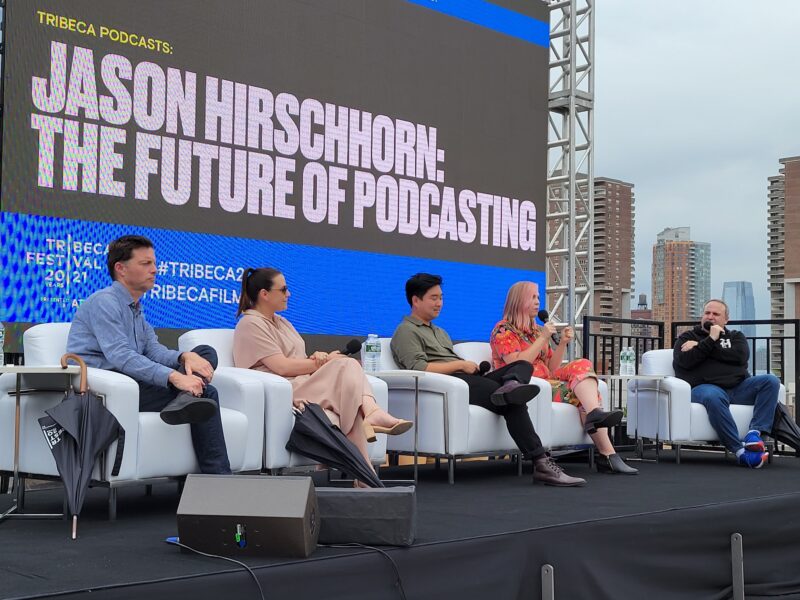 The Battery saw the world premiere of Bitchin’: The Sound and Fury of Rick James on day seven. In attendance for photos were: Emmy-nominated director/writer Sacha Jenkins, writer/producer Steve Rivo, producer/editor Jason Pollard, and executive producers, Mass Appeal CEO Peter Bittenbender, Douglas Banker, and Rick’s daughter, Ty James. The film, screening as part of Tribeca’s Juneteenth programming, is the definitive portrait of the legendary funk/R&B icon, set to a soundtrack that compels you to get out of your seat from the opening moments. The film was paused mid-way through due to New York State’s fireworks display in New York Harbor, which celebrated essential workers as the state reaches a 70% vaccination rate and lifts most COVID restrictions. The audience gave hearty rounds of applause when the fireworks and the reason behind them were announced, as well as after the spectacular light show’s grand finale, before the film continued on.

On the rooftop of Spring Studios, Jason Hirschhorn, Chief Executive Officer of the REDEF Group, a digital content curation company focused on media, music, technology, fashion and sports, joined film and television director and producer Doug Liman for a Tribeca Talk where they look back at what sparked his career, the backstory of Bourne Identity, and take a deep dive into his incredibly successful career. Liman reflects on how he got started in filmmaking noting, “What lit my fire was that my father’s client gave me a projector and a Super 8 sound recorder. I instantly started geeking out on technology and started recording. I started making films at the age of 6.”

Founding members Debbie Harry, Chris Stein and Clem Burke of the legendary rock band Blondie joined New York City artist and director Rob Roth for a wildly entertaining Storytellers conversation where they discuss their chart-topping success and fearless spirit, which led to induction into the Rock & Roll Hall of Fame in 2006. Speaking about Jean-Michel Basquiat, the band recalled “He was a good kisser!” and “He smoked a lot of pot.” Clem and Chris reflect back on their favorite Andy Warhol memories, saying they loved “shooting guns in Andy’s factory. No joke. We miss that factory.” The group also discusses the constant changes happening in New York City. Chris humorously makes a comment saying “Today, there’s not enough of a distinct group of weirdos.”