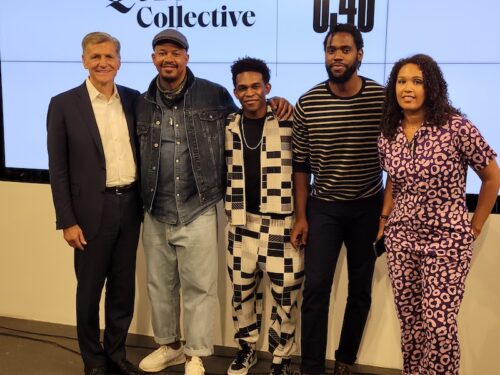 “I’d like to thank the cast and crew for flying into Detroit and working within the bubble. It was a big ask on their part,” Soderbergh said as he introduced the film to the sold-out Tribeca Festival audience.

For this 45-minute preview of upcoming documentary feature Turning The Table from director Matthew Miele and key cast including restaurateur Melba Wilson, Geoffrey Zakarian, and Eric Ripert joined the director and producers Anne Chertoff-Tavelin, Jaret Keller,Berry Welsh, and John Molner to share a sneak peak of the work in progress restaurant surviving during the global pandemic followed by a panel led by Katie Couric.

Paula Weinstein, Chief Content Officer, Tribeca Enterprises welcomed P&G Chief Brand Officer, Marc Pritchard to the Tribeca stage for his second consecutive night introducing the latest work from the brand’s Widen the Screen film program, 8:46 Films, created by black creative group Saturday Morning and produced by Tribeca Studios with aims to improve portrayal of Black life on screen and expand inclusion efforts for Black creators both behind the camera and on-screen. “We spent a lot of time talking about the 8-minute and 46-second video we saw last year. It changed the world and connected us in a way that we could have never imagined,” said Kwame Hayford, co-founder of Saturday Morning. “We turned pain into progress. Instead of pain and negativity, we channeled that into joy. The Black experience has so many important stories and those stories are the stories that will take us into the future.” Zoey Martinson, Director of Cupids, Camrus Johnson, director She Dreams at Sunrise.

Gibrey Allen, director of Pearl and Henry, and Marshall Tyler, director of Slow Pulse, debuted their films and shared what it was like to create during the Global Pandemic.

To celebrate the 25th anniversary of Best Picture Oscar winner Fargo, film producer Joel Coen participated in a conversation with Frances McDormand, who won the Oscar for Best Actress with her performance in the film, and Steve Buscemi. The in-person panel spoke to the history of the film, how the actors felt while re-watching themselves 25 years later and teased Coen and McDormand’s next project, the upcoming “Tragedy of Macbeth.”

Also at Spring Studios, filmmaker M. Night Shyamalan participated in a Tribeca Talk as part of Tribeca’s Director Series providing a glimpse into this visionary director’s artistic process across his career from The Six Sense, Unbreakable, Signs, The Village, The Visit, Split, Servant, and his upcoming film Old. Actor Alex Wolff (Old) moderated the conversation.

At the rooftop of Spring Studios, Tribeca X, in partnership with Roku, Inc. (NASDAQ: ROKU) celebrated the intersection of entertainment and marketing for the first in-person gathering of leading marketing minds since the global pandemic. CEO Tribeca Enterprises and Co-Founder Tribeca Festival,  Jane Rosenthal opened up the day with her remarks “I want to take a moment to appreciate that we’re really together in the same room… I mean, roof” which were met with laughter and applause. The day started with conversations featuring Anthony Wood, Founder and Chairman of Roku, the day’s sponsor. Walmart President and CEO, Doug McMillon joined the stage in a conversation led by James Murdoch, Founder & CEO, Lupa Systems and Google CMO Lorraine Twohill and Andy Berndt, VP & Strategic Advisor at Google discussed Stories worth telling in a conversation moderated by Jane Rosenthal.