On Your Screen, TGATP Art and Culture, TGATP Screen
December 16, 2011
by That Girl At the Party
0 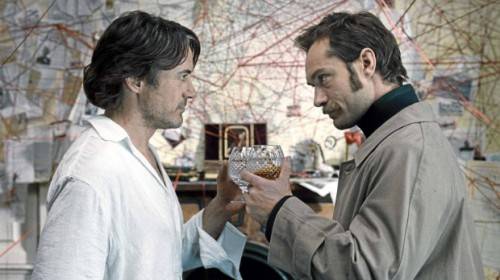 Smart, action-packed, rousting, and hilarious, Sherlock Holmes: A Game of Shadows is the one to see this holiday season!  Guy Ritchie‘s Sherlock is re-imagined not as a reclusive genius but as a thuggish rogue with a madcap side.  This reworking of Sherlock goes completely against the grain of Conan Doyle‘s creation who relied solely on his brain rather than his brawn.  While this is Sherlock for the new millennium, it renders the film almost completely unrecognizable from its source material.  However, this makes the film a helluva lot more fun than the drearily serious PBS-style Sherlock films we are used to.  The story by Michele and Kieran Mulrooney is more developed than in Ritchie’s first one.   The plot centers around the cat and mouse game between Sherlock and his nemesis and intellectual equal, Dr. Moriarty and takes us on a rollicking, nail-biting, edge-of-our-seats race across the continent.  Chock-full of explosions, gunfire, fist fights, and action the Game Of Shadows is far more exciting than Ritchie’s first stab at the genre.

This characterization of Sherlock is positively tailor-made for Robert Downey, who is at his very best combining intellectual prowess with raucous hi-jinks.  Jude Law, as his faithful sidekick Watson, is pitch perfect mixing his love and admiration for Sherlock with his annoyance at his life-threatening shenanigans.  And I can think of no better actor than Jared Harris to play Professor Moriarty.  Quietly malevolent, he is the best on-screen villain of the year to date. (The off-screen award goes to Yee Lim, my evil Williamsburg landlord, who is trying to put tenants out of our building at Christmas to up the rent!  Yikes, where’s OWS when you need ’em!)  Stephen Fry makes a memorable comedic turn as Sherlock’s eccentric brother, Mycroft.  The female leads, Nooni Rapace, as Sherlock’s second sidekick on this mysterious journey the gypsy Madam Simza and Kelly Reilly as Watson’s new wife, are also outstanding.

Land's End for the Holidays!

Give The Gift Of Memory With Prevagen