With the arrival of the 2009 US Open, tennis fever has taken over the city!  I attended three parties in two days to celebrate.  First up was the NY Observer party held in a beautiful downtown penthouse on Wednesday. 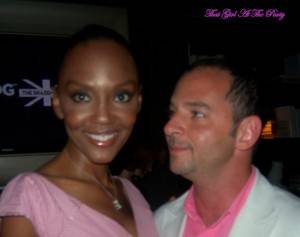 Next on Thursday, Fila launched the Thomas Reynolds by James Blake line at Lord and Taylor’s.  The line is being called a “co-branded collaboration” that is “inspired by the ATP world Tour tennis star’s Life and interests.”  It is named after Blake’s late father, who passed in 2004, and who Blake credits with giving him the values that have led to his success in Life.  The food was awesome from Sarabeth’s and the outdoor space is always lovely on a summer night.  The only thing I would’ve have done differently is the clothes needed to be featured.  For example, the wait staff should’ve all been sporting  the line and each guest should’ve received an item in a gift bag a la the Charlotte Ronson event.  As it was, the clothes took so much of a backseat that the event could’ve been for anything.

Also on Thursday, AYS held the 10th Annual Taste of Tennis, which is a pairing of amazing chefs and star tennis pro appearances, to benefit Food Bank for New York City.  This year”s tennis pros included Andy Roddick, Tommy Haas (who should be called “Tommy Hot”!), Fernando Gonzalez, Vera Zvonareva, Nicholas Kiefer, Lleyton Hewitt, and Sam Groth. On the chef side, Real Housewife of NY and Natural Food Chef, Bethenny Frankel, Caterer Carla Hall, Tim Love of Lonesome Dove Western Bistro, Mario Pagan and Roberto Trevino of Rums of Puerto Rico, and Kevin Harry of Heartbeat at the W were just some of the outstanding attendees.  (Kevin actually made my favorite dish of the night which was an orange infused Tomato Bisque with a griled pulled pork and cheese sandwich!)  Jam-packed to the hilt, this party was a smashing good time and I have never eaten better!   Thank God, DJ Mel Debarge was spinning because everyone needed to work off all the food.  Surprisingly, ubiquitous crasher and general weirdo Vadim, was allowed entry and was actually sporting a badge!  True to his usual form, he was lurching around and rumored to be scrounging as many gift bags as possible!