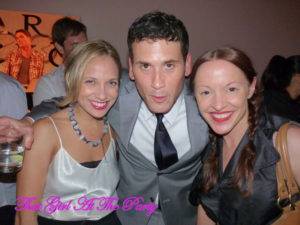 It’s comforting to know that there are still folks willing to support poor lil’ lost chile, Lindsay Lohan‘s fading career!  Last night at Milk Studios, Marc Ecko unveiled his new multi-media ad campaign for his “Cut and Sew” line, featuring the fresh from jail/currently luxury rehabbing Lilo.  The concept is an innovative marketing tool, which utilizes holographic images of celebrities, and brings a fresh interactive approach to the Ecko brand.  Drawing the consumer into the ad experience through what Ecko has dubbed “augmented reality”, a special encoded GLYPH tracking code can be found in all Marc Ecko Cut & Sew fall marketing materials or downloaded online at “www.marceckomuse.com“.  Consumer can then log onto the Ecko website and position the GLYPH in front of their web cameras.  Within seconds, a hologram of the featured celebrity muse (in this case Lindsay) will appear before their eyes.  The effect is a hologram that appears to be actually coming out of the user’s computer. 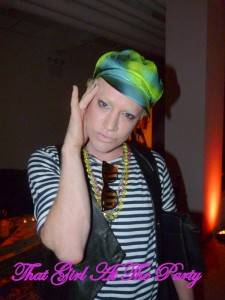 Lindsay will appear in a series of four video skits, written by Ecko, that correspond with each ad campaign image.  The ads were shot in NYC by fashion/celebrity photographers and Bravo “Double Exposure” stars, Markus Klinko and Indrani.

The choice to use Lindsay as the first muse was to my mind an odd one.  But Ecko states “A muse has the ability to inspire the artist to create in ways they wouldn’t otherwise contemplate.  For better or worse, they make you feel  something, emotionally.  I cast Lindsay because people are fascinated with her – they can either feel good or bad things but they are feeling some type of emotion.  She’s a pop culture icon.”

Using the power of emotion, Ecko has also incorporated a special tool for web users that allows them to click a wheel icon, which represents the eight basic human emotions identified in Putchick‘s theory.  Once the user clicks on the emotion, the Lindsay hologram acts out that emotion.  Thus, the user can effectively “play with” Lindsay’s emotions.

While I am still not convinced that fading star Lohan was the best decision for the Ecko brand, TGATP has never seen anything like it.  I would love to be one of the future muses just to see a hologram of myself!   Celebs in attendance for the unveiling/demo included:  Ecko, Anthony Mackie, Ritchie Rich, Mick Rock, Markus Klinko and Indrani. Indrani is always such a delight to see and is as glamorous as she is gracious.