On Your Screen, TGATP Screen
September 1, 2010
by That Girl At the Party
0 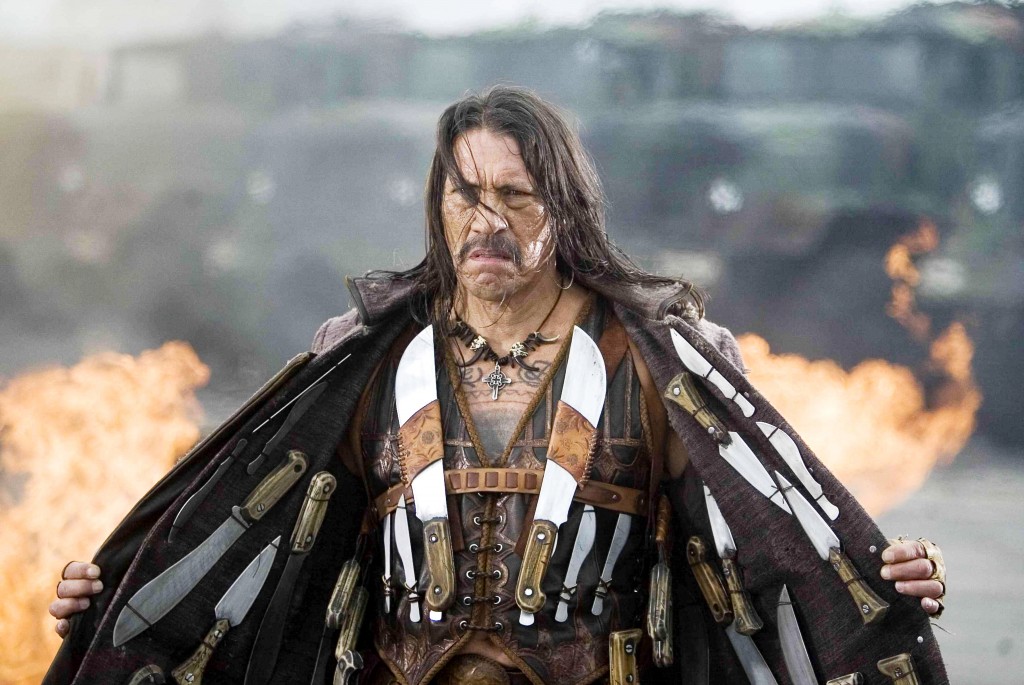 Coming off what was arguably one of the worst days of my Life, whereby a potentially lucrative gig went suddenly south, I was blessed to be invited to a press screening of Machete. The film is a “Mexploitation” saga loaded with all the best things we have come to expect of the genre  – a revenge story, tons of violence and gore, loads of gratuitous nudity (yes, boys you get to see Jessica Alba fully naked) spontaneous acts of sex, a political agenda, and wickedly funny dialogue!  Machete also lays claim to the most creative use of human intestines ever filmed, which was nasty but had me laughing well past the scene!.

Based on the Black films of the ’70’s, the film tells the story of former Federale Machete.  When his wife and daughter are murdered by an evil drug lord (Steven Seagal, who is uncharacteristically good), Machete illegally emigrates to Texas, where he is recruited to assassinate a crooked  senator, (wonderfully played by Robert DeNir0). When the assassination plot turns out to be a set-up, Machete is forced underground where he is aided by two incredible women.  Michelle Rodriguez plays “She”, the shero of illegal immigrants who helps people cross the border and make lives for themselves.  She becomes  both Machete’s lover and benefactor of the $150K from the failed hit.  Jessica Alba is the immigration officer, investigating She’s operation, who ends up going over to the right side and assisting Machete and She.

Danny Trejo, best remembered for his roles in “Desperado” and “Anaconda,” portrays Machete with the right  amount of camp seriousness and deadpan humor that the role calls for.  The cameos brought fits of laughter from the audience and included Lindsay Lohan, who basically plays herself, – a sex crazed, spoiled lil’ rich girl with substance addictions and an enabling Mom.  Gotta give it to Lindsay for lampooning herself, although her nude scenes were irritating and unnatural since she kept her hair extensions strategically placed over her breasts at all times!  What was THAT all about?  Did they glue the hair down?  Cheech Marin plays Machete’s badass, stoner priest brother and Jeff Fahey, wickedly portrays the villain, DeNiro’s chief of staff, who is so crazy he “wishes his daughter (Lohan)  saw him more like a man.” Ewww a baddie who lusts after his own kid!  Rounding out the cast is Don Johnson as the evil Sheriff,  who conducts immigrant hunts and films the killings for entertainment.

Only Rodriquez could make action sequences funny!  As in his portion of “Grindhouse”, the gory but hysterical “Planet Terror”, this film makes you laugh at the same time it totally grosses you out.  Machete is a “Mexploitation” saga loaded with all the best things we have come to expect of the exploitation genre  – a revenge story at the core,  tons of violence and gore, loads of gratuitous nudity (yes, boys you get to see Jessica Alba fully naked) spontaneous acts of sex, sicko bad guys, a political agenda and wickedly funny dialogue!  In addition, Machete lays claim to the most creative use of human intestines ever seen in a movie which had me laughing well past the scene!

A riotously funny action-packed hoot and a holla, Machete is an instant cult classic and not to be missed!

A note: Immigrant bashers, like Chrissy (a.k.a.”Peachy Deegan”) of the pretentiously titled “Whom You Know” who idiotically claim their people date back to the Mayflower, as if that really means anything, might want to skip this one. You won’t see the humor or get the politics.  The jokes are all on you!