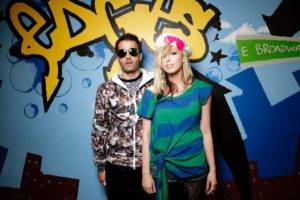 KIN, Microsoft’s newest line of phones, is hosting  a series of free Spot concerts as a massive social experiment bringing people together through the ways they interact with their phones and social networks.  The first two Spot concerts were last Saturday in San Francisco where Yeasayer took over the Longshoreman’s Hall and N.E.R.D + Asher Roth performed at European Collision Center. Word is spreading about the concerts through social networking sites. The week before the show, details were slowly revealed via Facebook with the final location being shared just hours before each show.

Last weekend, NYC was the second stop in the series of free shows in May.  The KIN SPOT events are bringing the most buzzed about bands and artists directly to their fans in four major cities across the country – all via the power of social media.   Information about the NYC shows were revealed one detail at a time over the week before the shows, via the KIN’s Facebook page, with the final locations being shared just hours before the artists go on stage.

On Friday night, Passion Pit took the stage at NYC’s Classic Car Club and Saturday night, The Black Keys took over the same spot. On Saturday, the Ting Tings also performed in NYC at another spot.  These unexpected “Spots” were chosen to bring the story behind the experiment full circle. All of the shows had lines forming within minutes of the locations going public via the KIN Facebook page.

Keep a look out for the next stop in Chicago with the Dead Weather. Follow the KIN Facebook page to get the details about next weekend and potentially other cities. You can also connect with KIN via Twitter.

Designed specifically for people who are actively navigating their social lives, KIN is a new experience that blends the phone, online services and the PC.  Brought to you by Microsoft and Sharp, exclusively on the Verizon Wireless network, KIN pulls form your social networking feeds and favorite websites to bring together the latest info on the people and stuff you care about – in one place, in real time. And almost everything on your phone – messages, contacts, photos and videos – is backed up to a private, password-protected website where you can visit all of your memories anywhere there is a computer.

TGATP has HealthMaster prepared dinner and chats with Montel Williams