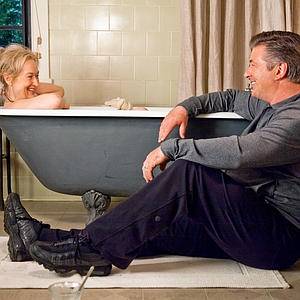 More than a “chick flick”, It’s Complicated is a film for grown-ups.  Meryl Streep plays Jane, who was cheated on by her irascible hubby for a much younger woman only to have him return years later.  Meryl is her usual incomparable self in the role and imbues Jane with an effervescent that makes every 40+ woman want her as a BFF and every real man desire her.  We can see why Alec Baldwin’s character initially fell in love with her and we can see why he misses her.  She is a delight!  Alec Baldwin brings his 30-Rock comedic timing to his role as the lovably roguish Jake and the two completely sizzle together.  He should definitely be in line for an Oscar for Best Supporting Actor.  It was wonderful to finally see a film where a natural older woman is portrayed as attractive in the usually youth-obsessed Hollywood.  While Lake Bell’s Agness may have the harder body, she definitely also has the softer and weaker mind.  This was interesting and uncharted territory and I betcha there are tons of real-life men who silently end up regretting leaving their long term wives for 20-something arm candy.  The script has some witty exchanges and riotous situations, such as the pot-smoking scene, that make for a laugh out loud good time.

The only misstep in the film is the casting of Steve Martin, who is far too goofy to be believable as the other man in the triangle.  Baldwin is too attractive, even with his beer belly, for there to be any choice to be made.   Martin’s acting is appalling and he always makes the same shrugged shouldered, pursed lip gesture to convey his supposed poignant mode.  He portrays his character as desperate and slightly pathetic which creates a big distraction in the story.  You just don’t buy that a hip  fun woman, like Jane, would find this schlub desirable.  Someone, like Pierce Brosnan, would’ve made a far better choice in this role.  This is a common occurrence in Nancy Meyer films.  I felt the same way about the choice between the unattractive Jack Nicholson and the irresistible Keanu Reeves in “Something’s Gotta Give”. In fact, although I love and own that film, I always have to stop watching it about ten minutes before the end because the ending just defies rational belief.  Everyone wanted a more “The Philadelphia Story” type ending!

That said, It’s Complicated is a definite holiday must see for anyone who wants a hilarious, yet realistic, romantic comedy.