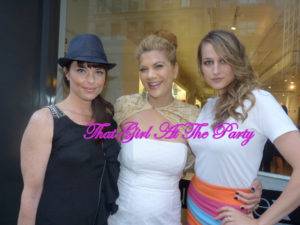 Skipped all the hoolala around the “Sex and the City II” premiere.   Since I am going to a media screening today and don’t drink any longer, I no longer see the need to attend difficult to navigate events with large crowds.  In addition, I had a ton of other more accommodating events to choose from, including the “Finding Bliss” screening, at the always entertaining Museum Of Sex. I was cheerfully greeted by an exiting Kristen Johnston, who despite the fact she was rushing off with her co-stars, Leelee Sobieski and Donnamarie Recco called them out of a cab to pose for TGATP!  I was so honored that she remembered me and even went as far as to describe me as “cool” to the girls, which I consider high praise from such a fab gal!  Jamie Kennedy was also a sweetheart.  He expressed surprise that everyone in the City seemed to have seen his appearance on the Wendy Williams show the previous morning.

The movie itself is so bad that it’s five-star entertainment and a must see!  With a story centered around the adult film industry and a stellar cast yet an obviously very low-budget, the movie had tons of both planned and unintentional laughs.  Hell, buy a ticket to see it, if only to see Jamie’s  full monty!  Only a very confidently endowed man would’ve  allow that.  Have developed a slight crush on Jamie since his hilarious Wendy W appearance, in which he stated, that he likes curvy girls with a bit of “badunk in the trunk”, rather than the stick thin American ideal.

The reception was lovely with a very small intimate crowd (only about 20 people) in the Museum’s shop.  The  catering was from TGATP fav, Tastings, who provided their usual sumptuous fare and, much to my delight,  served delicious and refreshing, alcohol-free cocktails.    With many of us choosing to lead healthier lifestyles, more events should include non-alcoholic options, such as these, on their menus.

Just in time for Spring, a 4-Piece Blusher Kit from Bare Escentuals!