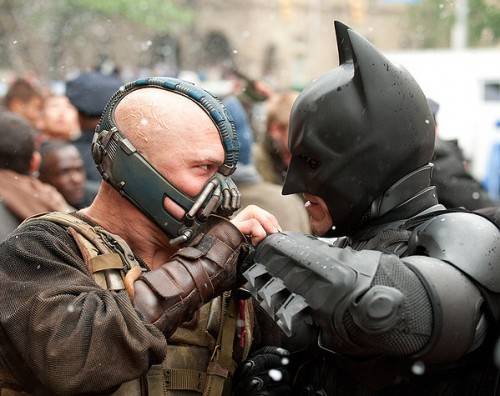 “The Dark Knight Rises” is the most highly anticipated movie of the summer.  TGATP lets you in on 10 things you didn’t know about the film.

1. This is the first time a director has completed a Batman trilogy but not a superhero one.  Sam Raimi holds that distinction for his direction of the three Spidey films.

2. Aaron Eckhart refused to accept the death of his character Harvey Dent but director Nolan had other ideas.  Eckhart asked to return as Dent/Two-Faced but was, unfortunately, not resurrected.  His death is a crucial plot development for part three.

3. Ryan Gosling,  Mark Ruffalo, and Nolan’s Inception star, Leonardo Di Caprio were all considered for the role of the courageous cop, John Blake.

5. Nearly half of “The Dark Knight Rises” was shot on IMAX large-format cameras, utilizing ultra resolution film.  Nolan states, “We got great results with the IMAX cameras on the last film.  I appreciate what if offers from the technical side, but I’m most interested in what it can give me as a storytelling tool.  How can it help me pull the audience deeper into this world?  IMAX provides the broadest possible canvas, creating the most immersive experience.”

7. Cotillard was Nolan’s only choice for the role of Marion.  He held up the beginning of production to allow for the birth of her son, Marcel.

8. Composer Hans Zimmer incorporated a chant into the music associated with Bane, which became for the composer, an opportunity to reach out to fans to participate in the film’s soundtrack.  Fans were invited to send in their chants via UJAM and thousands responded from all over the globe.  The chosen submissions were then synced to create the haunting chant heard in the film.

10.  In memory and out of respect for the late Heath Ledger, no mention is made of the Joker in the current film.

(We learned of the shooting at the midnight screening of “The Dark Knight Rises” in Aurora, Colorado after the writing of this story.  Our hearts break for the victims of this awful and senseless tragedy.)

Thoughts on the Aurora Shooting, Zimmerman, and more

Inception is THE Must-See Film of the Year!