On Your Screen, TGATP Art and Culture
November 2, 2013
by That Girl At the Party
0 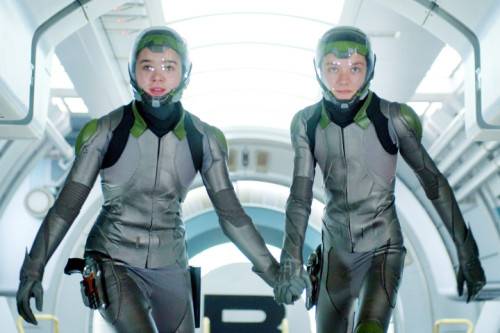 Ender’s Game is a sci-fi thrill ride for both readers of the book and  those of us who are new to the material.  Based on the YA before there was YA novel, by the now famously controversial Mormon right winger Orson Scott Card, it is a must-see for all ages.  Set in the not so distant future, the film portrays a dark future where we will on trained tween warriors, who are experts at killing after hours hooked to video games, to protect us.
As Ender, Asa Butterfield (of “Hugo” fame) is the most believable and engaging character in a sci-fi film in a very long time.  Rather than the wide-eyed, “oh golly, aw shucks” of a young Luke Skywalker, Butterfield’s Asa is tough from the start with a commander’s heart that simply needs to be properly channeled.  Hailee Steinfeld and Abgail Breslin, are perfectly cast as Ender’s most faithful comrade and his sister, respectively.  Another stand out in the cast is Moises Arias, as Ender’s chief antagonizer.  (Unfortunately, it seems that even in the future, we will still not be rid of bullies and haters!)

Harrison Ford and Viola Davis provide great performances as the adults, who run the Battle School for the space youth and see both the potential in Ender and his youthful weaknesses.  A brief appearance by Ben Kingsley, as a Maori space warrior, could’ve been extended as Kingsley always commands an audience’s full attention.

Initially the notion of child soldiers is quite disturbing, especially when one thinks of the current use of them in Myamar, Africa and other undeveloped nations.  However, if you disengage and allow yourself to be entertained, you will be.  As directed by Gavin Hood, the film is action packed and fortunately, shies away from schlocky tween romance focusing strictly on the Ender’s evolution and the moral dilemma he faces.  The ending was a bit hasty and screamed “sequel!” which was a shame for an otherwise excellently directed film.  But I fell so in Love with Ender, that I will definitely be front and center for that certain second film.   Make sure to see “Ender’s Game” in IMAX to get the full effect.

A Note:  I found out after writing this review that the author of “Ender’s Game” is a hate filled wingnut, who has expressed both racist anti-Obama views and anti-Gay sentiments.  It’s an interesting dilemma that has never occurred for me.  I loved this film and story but the messenger is odious!   So I guess this is another case, like that of John Mayer, where create great positive artistic works are created by a total idiot.    Boy, Life sure is interesting!

Celebrating Dana Tycher-Reisman and the Launch of DTR Styles

After Midnight Is A Smash Must-See Broadway Hit!

Cowboys and Aliens is Two Thumbs Up!