In he past month, I have attended three spectacular food events in the city and outer boroughs.  With good food and drinks, new products, cooking seminars, and fun people, the foodie events around the city combine all the best event elements.  They are always an absolute hoot!  Cook.Eat.Live. was no exception.  I got to attend  seminars from Ted Allen, formerly of Bravo’s “Queer Eye for the Straight Guy” and currently on the Food Network’s “Chopped” and my favorite French chef D’Artagnan owner, Ariane Daguin.  Ted is just hilarious and we all got a real kick when he recounted some of the more hilarious moments he has experienced while filming “Chopped.”  There were tons of great products to sample including sauces and pasta from Grandpa Pete’s and personalized cereal mixes from Mix My Granola that I will be reviewing in future posts. 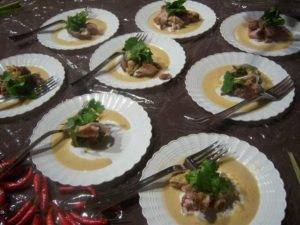 The Brooklyn Chamber of Commerce also held an amazing food event in the form of their annual Brooklyn Eats. Held at Abigail Kirsch at Steiner Studios, the evening featured 32 of the best restaurants in Brooklyn offering their extraordinary delicacies!  As is tradition, three students were awarded scholarships to culinary school through the Brooklyn Eats Scholarships program.  The only problem with this event was there was just too much food for a girl to actually sample!  Two offerings actually knocked my socks off!  First, was the Bubble and Squeak from Chef Seth Adey of Bussaco (833 Union St, Brooklyn).  And secondly, my favorite taste of the evening, Cider Glazed Baby Back Ribs with House-made Dill and Bread and Butter Pickles from Chef Ryan Angulo of Buttermilk Channel (524 Court St. Brooklyn).  I went back for the ribs three times!  (At the end of the night, one attendee actually filled containers with them and refused to share with anyone else!  I know this guy so I was surprised that he had such a tacky ghetto side! ) 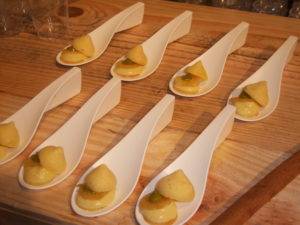 And finally, the 11th Annual Taste of NY benefitting City Harvest was an explosion of great eats with all of the best NY restaurants preparing tasting menus.  There were tons of standouts!  I loved the Fideos de Calamar from La Fonda del Sol.  The tastiest soup I have ever had was the Bacalao-Coconut Mousse dish from Aldea.  The Lamb-Meatball Sliders were an inspiration and the Squab Tortelli with Ricotta and Black Mission Fig from Le Cirque just divine!  The food was so incredible that, even truly awful manners on the part of the NY Mag PR folks towards the press/sponsors, could not mar the evening.  (Honestly, when are some of these PR people going to figure out what their job title entails?  PR stands for “public relations” which you presumably want to be good ones!)