Was whisked to a castle in the Hamptons by coach to attend the Castlestock event.  Held by the eccentric musician, Sir Ivan, the event was a Woodstock themed fundraiser for his organization The Peaceman Foundation.  Inspired by the lifelong philanthropic work of his father, Siggi Wilzig, The Peaceman Foundation is dedicated to combating hate crimes and assisting sufferers of Post Traumatic Stress Disorder (PTSD).  Mr Wilzig was a Holocaust survivor who spent two years in Auschwitz and endured the lost of 59 family members murdered by the Nazis.  He went from being penniless to founding a multi-billion dollar banking empire and  led a life of charitable service to others including a stint with Nobel Peace Prize winner Elie Wiezel, on the Holocaust Memorial Commission during the Carter administration.  Although he was never formally diagnosed with PTSD, Mr Wilzig displayed classic symptoms throughout his life.

As we stepped off the bus, the grounds drew “ews” and “ahhs” as they were decked out with blankets and pillows and large sunflowers to re-create a ‘60s love-in vibe.  There was also a pool with dry ice and a large bed outside which evoked Hefner’s grotto.  As a definite Hippie child, the decor was a complete fun fantasy for me!  The only faux pas was that the DJ spun mostly techno music, which threw the feeling off.  Many of the guests voiced that they would have preferred if the soundtrack had stayed truer to the theme and featured more Crosby Stills and Nash, Jimi Hendrix, Doors, Jefferson Airplane, etc…   Especially since we were decked out in our hippie finest!   There was an odd TMI moment when the guests discovered the S&M room in the castle that had tables to strap people to and large stuffed white bunnies (don’t ask!) .  This produced nervous titters.  I think I would’ve kept those screens closed!  Call me old fashioned but I feel that such peccadilloes are best left private!

Didn’t spy many celebs in attendance.  However, the press was made to play royal subjects, as opposed to members of the court, so no one knows who was on the inside of the event.  (Wonder if anyone famous hit that S&M room later?) Michael Musto was in attendance, but oddly, relegated to the outside with the rest of us journos and seemed not at all his usual happy self about it. 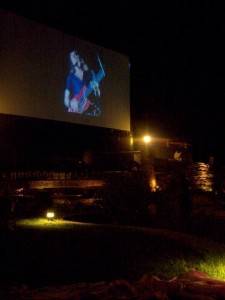 My favorite part of the evening was that there was an outdoor screen projecting “Woodstock” on the front lawn, which allowed me to embrace my inner Hippie!  So I stayed there for most of the night.  Despite a slight flirtation with a former acquaintance with the most amazing baby blues, I unfortunately, did not get absconded into the night by a dashing prince or even a hot knight.  But, ever the optimist, I rest assured that someday that prince will truly come!