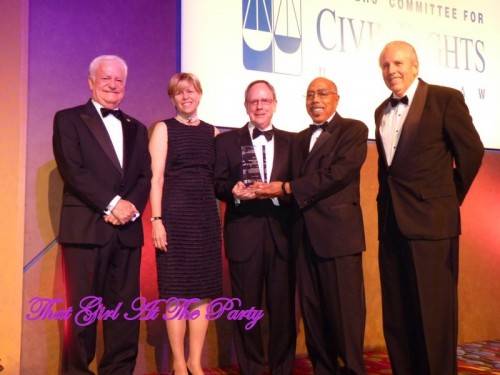 On October 24th, the Lawyer’s Committee for Civil Rights Under Law held their annual A. Leon Higginbotham Dinner at the Marriott Marquis, celebrating the legacy of the late great A. Leon Higginbotham.   Higginbotham, a distant relative on my maternal side, stood for civil rights his entire life.  A noted lawyer and activist he was appointed by John F. Kennedy to serve as Comissioner of the Federal Trade Commission.  This was a historic appointment as it gave Higginbotham the distinction of being the first African-American to ever serve on a US regulatory board.  This was a truly courageous move by Kennedy as the appointment occurred a  full three years before the Civil Rights Act was signed.  When Kennedy was assassinated, Lyndon B. Johnson called on Higginbotham to assist him on numerous occasions throughout his presidential term.  After serving as a District Court Judge for 13 years, he was elevated to the United States Court of Appeals for the Third Circuit.  Higginbotham was also instrumental in assisting South Africa’s transition to democracy and served as one of the international mediators of the first inter-racial elections in South Africa in 1994.  He also testified in President Clinton‘s defense during Clinton’s (ridiculous) 1998 impeachment hearings.  In his later years, he returned to private practice and taught at Harvard thus passing the torch to a new generation of freedom fighters. A truly great man, Leon Higginbotham was awarded the first Spirit of Raoul Wallenberg Humanitarian Award in 1994, the Presidential Medal of Freedom in 1995, the NAACP’s  highest honor, the Spingarn Medal in 1996, and honorary degrees from 62 different universities.

This year’s Higginbotham award was presented to Jim Skinner for the outstanding work that McDonald’s represents.  Say what you will about the wholesomeness of the menu, a full 44 percent of McDonald’s franchises are owned by minorities.  In addition, minorities represent 10% of their executive rooster.  This is an astounding number when one considers that most corporations still have no minority representation in the board room.

The evening was emceed by the Ali Veschi of CNN and featured a riveting update on the great work the LCCRUL by their enigmatic Executive Director Barbara Arnwine, who is an admirable force of nature.  Barbara recently hipped us to the fact that there are still rampant shenanigans going on around voting rights in this country that we need to vigilantly fight against.  Her Map of Shame outlines the states that are actively seeking to disenfranchise voters by adding new restrictions to voting rights.

About the Lawyers’ Committee for Civil Rights Under Law

The Lawyers’ Committee for Civil Rights Under Law (LCCRUL), a nonpartisan, nonprofit organization, was formed in 1963 at the request of President John F. Kennedy to involve the private bar in providing legal services to address racial discrimination. The principal mission of the Lawyers’ Committee is to secure, through the rule of law, equal justice under law, particularly in the areas of fair housing and fair lending, community development, employment discrimination, voting, education and environmental justice.

The Lawyers’ Committee implements its mission and objectives by marshaling the pro bono resources of the bar for litigation, public policy advocacy, and other forms of service by lawyers to the cause of civil rights.  For more information about the LCCRUL, visit www.lawyerscommittee.org.

TGATP Outrage Over The CNN Reporting of The Steubenville Verdict