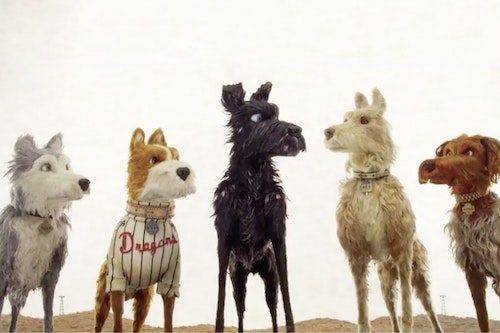 Even though I am blessed to see a lot of films at press preview –  with two horrors, three action, and a wonderfully poignant teen film – I still plan to be at the cinema every weekend in March! And If you don’t already have one, this is a good time to get a Movie Pass as the Spring/Summer slate is looking swell!

I missed the press preview of this, but it is one I am looking forward to seeing it. Jennifer is always fascinating to watch particularly in action films.

Plot Summary: Prima ballerina Dominika Egorova faces a bleak and uncertain future after she suffers an injury that ends her career. She soon turns to Sparrow School, a secret intelligence service that trains exceptional young people to use their minds and bodies as weapons. Egorova emerges as the most dangerous Sparrow after completing the sadistic training process. As she comes to terms with her new abilities, Dominika meets a CIA agent who tries to convince her that he is the only person she can trust.

The original “Death Wish” with Charles Bronson is one of those films that I watch every time it comes on. The new one taps into that same vigilante goofiness but adds signature Eli Roth gore making it a perfect grindhouse flick.

Plot Summary: Dr. Paul Kersey is a surgeon who often sees the consequences of the city’s violence in the emergency room. When home intruders brutally attack his wife and young daughter, Kersey becomes obsessed with delivering vigilante justice to the perpetrators. As the anonymous slayings grab the media’s attention, the public begins to wonder if the deadly avenger is a guardian angel — or the Grim Reaper itself.

A Wrinkle In Time

Due to a muddled plot, watered down spirituality and some other weird script choices. I was disappointed with this adaptation of the classic 60’s Madeleine L’Engle novel. However, it is visually stunning and I hear if you have read the book – I hadn’t – then it will make more sense to you.

Plot Summary: Meg Murry and her little brother, Charles Wallace, have been without their scientist father, Mr. Murry, for five years, ever since he discovered a new planet and used the concept known as a tesseract to travel there. Joined by Meg’s classmate Calvin O’Keefe and guided by the three mysterious astral travelers known as Mrs. Whatsit, Mrs. Who and Mrs. Which, the children brave a dangerous journey to a planet that possesses all of the evil in the universe.

The Strangers: Prey At Night

I am not a great fan of the films, like this and “Funny Games”, where people are just taunted and murdered by absolute strangers. The first film, “The Strangers” is one of the most disturbing films I have ever seen. This one has slightly more of a plot, though the people were irritatingly stupid in places. Like, who turns their back on a woman hacking her way through the bathroom door with a knife?! Wouldn’t you grab the top of the toilet seat and bash her over the damn head?? I sure would.

Plot Summary: Mike and his wife Cindy take their son and daughter on a road trip that becomes their worst nightmare. The family members soon find themselves in a desperate fight for survival when they arrive at a secluded mobile home park that’s mysteriously deserted — until three masked psychopaths show up to satisfy their thirst for blood.

A stellar cast with a goofy premise, Gringo is hilarious!

Plot Summary: Mild-mannered U.S. businessman Harold Soyinka finds himself at the mercy of backstabbing colleagues, local drug lords and a black ops mercenary after traveling to Mexico. Crossing the line from law-abiding citizen to wanted criminal, Harold fights to survive an increasingly dangerous situation that raises the question — is he out of his depth or two steps ahead?

Legends Helen Mirren and Donald Sutherland, as an elderly couple traveling to Key West, tugged at my heart. My father is in the final stages of Alzheimer’s, so the topic of elderly memory loss is very personal to me. Plus, it has the final screen appearance of my beloved Dick Gregory. I loved this tale of love in later years.

Plot Summary: Traveling in their family Leisure Seeker vintage recreational vehicle, John and Ella Spencer take one last road trip from Boston to the Hemingway House in the Florida Keys before his Alzheimer’s and her cancer can catch up with them.

I initially wasn’t thrilled to hear that “Tomb Raider” was being remade so soon after the awesome 2001 Angelina Jolie franchise. But Alicia Vikander is perfectly cast and this was kick-ass!

Plot Summary: Lara Croft is the fiercely independent daughter of an eccentric adventurer who vanished years earlier. Hoping to solve the mystery of her father’s disappearance, Croft embarks on a perilous journey to his last-known destination — a fabled tomb on a mythical island that might be somewhere off the coast of Japan. The stakes couldn’t be higher as Lara must rely on her sharp mind, blind faith and stubborn spirit to venture into the unknown.

Oh how I adore this film! It is an instant teen classic and romantic movie magic. Everyone is perfectly cast and you will both laugh and cry throughout. From Simon to his cool friends to his parents, you will literally fall in love with all of these characters. It’s one of those rare current films, you will want to watch again and again. I hope this does not get forgotten by 2019 Awards season, because the script and Nick Robinson are Oscar-worthy!

Plot Summary: Everyone deserves a great love story, but for 17-year-old Simon Spier, it’s a little more complicated. He hasn’t told his family or friends that he’s gay, and he doesn’t know the identity of the anonymous classmate that he’s fallen for online. Resolving both issues proves hilarious, terrifying and life-changing.

This quirky comedy was a buzzy hit at last year’s Tribeca Film Fest. See this for Zoey Deutch, a newcomer on the rise, who is sure to become a major star.

Plot Summary: Rebellious, quick-witted Erica Vandross is a 17-year-old firecracker living with her single mom, Laurie, and her mom’s new boyfriend, Bob, in L.A.’s San Fernando Valley. When Bob’s mentally unbalanced son, Luke, arrives from rehab to live with the family, Erica finds her domestic and personal life overwhelmed. With Luke and her sidekicks Kala and Claudine in tow, Erica acts out by exposing a high school teacher’s dark secret.

I was one of the few critics that loved the original “Pacific Rim” and really wish they had found a way to expand on the original story that starred Charlie Hunnam. I also wish that Oscar winner and generally awesome guy, Guillermo Del Toro was still directing this series. However, I’ll still had a blast at this girl power centric sequel.

Plot Summary: Jake Pentecost is a once-promising Jaeger pilot whose legendary father gave his life to secure humanity’s victory against the monstrous Kaiju. Jake has since abandoned his training only to become caught up in a criminal underworld. But when an even more unstoppable threat is unleashed to tear through cities and bring the world to its knees, Jake is given one last chance by his estranged sister, Mako Mori, to live up to his father’s legacy.

Wes Anderson of “The Royal Tennebaums” and “The Grand Budapest Hotel” (which was robbed of its Best Picture Oscar in 2014) is one of my favorite filmmakers and everyone knows I am dog crazy. So this was the film I was most looking forward to this month. Matching Anderson’s wit with incredible animation seemed a winning cinematic combo. However, the dogs are so abused and the people so awful to them that I was actually crying in parts. This is not an easy view for dog lovers, like me, and was far darker than I would’ve liked.

Plot Summary: When, by executive decree, all the canine pets of Megasaki City are exiled to a vast garbage-dump called Trash Island, 12-year-old Atari sets off alone in a miniature Junior-Turbo Prop and flies across the river in search of his bodyguard-dog, Spots. There, with the assistance of a pack of newly-found mongrel friends, he begins an epic journey that will decide the fate and future of the entire Prefecture.

Combining two basic human fears – being stalked and losing your mind –  this thriller is a must-see. Directed by Steven Soderbergh, whose last foray into the thriller genre was the excellent and twisty “Side Effects”, this is too linear and lacked the punch of that superior film. Claire Foy and Joshua Leonard, as her stalker, are both excellent. There is also a wonderful turn by Jay Pharaoh, as a supportive friend in the mental hospital. However, I could have used more of a Soderbergh twist rather than a straight forward story.

Plot Summary: Sawyer Valentini relocates from Boston to Pennsylvania to escape from the man who’s been stalking her for the last two years. While consulting with a therapist, Valentini unwittingly signs in for a voluntary 24-hour commitment to the Highland Creek Behavioral Center. Her stay at the facility soon gets extended when doctors and nurses begin to question her sanity. Sawyer now believes that one of the staffers is her stalker — and she’ll do whatever it takes to stay alive and fight her way out.

I am a sucker for a nice romance especially in the Spring. This is a great date night or girl’s night out film.

Plot Summary: Sheltered since childhood, 17-year-old Katie Price lives with a life-threatening sensitivity to sunlight. Her world opens up after dark when she ventures out to play her guitar for random travelers. One night, Katie encounters Charlie, a young man she’s secretly admired for years. As fate leads to a budding romance, Katie desperately tries to hide her condition from her unsuspecting new beau.

Three words: Steven Spielberg’s latest!  Ready Player One is not to be missed with loads of action, a laugh out loud script with dozens of pop culture references and a fun 70’s/80’s soundtrack. (Hilariously, the villain resembles a notoriously obnoxious Warner Brothers film publicist. I’m sure that is an inside studio joke and was no coincidence! LMAO!)

Plot Summary: In 2045, the planet is on the brink of chaos and collapse, but people find salvation in the OASIS, an expansive virtual reality universe created by James Halliday. When Halliday dies, he promises his immense fortune to the first person to discover a digital Easter egg that’s hidden somewhere in the OASIS. When young Wade Watts joins the contest, he finds himself becoming an unlikely hero in a reality-bending treasure hunt through a fantastical world of mystery, discovery and danger.

Tyler Perry movies are my guilty cinematic pleasure. I am also mad for Taraji, having met her way back in 2009 at a Sam Fine event at the Plaza. I also love these sort of campy thrillers. Acrimony is wonderfully written spanning the full spectrum of emotions that can be felt during a turbulent love relationship. Sure Taraji, as “Melinda”, goes full on Fatal Attraction by the end. But up until that point, viewers can understand her mix of love and anger towards her dreamer husband, beautifully played by both Antonio Madison, as a young man then Lyriq Bent, 18 years later. This is truly one of Perry’s best films.

Plot Summary: A woman becomes enraged after learning the truth about her philandering husband.