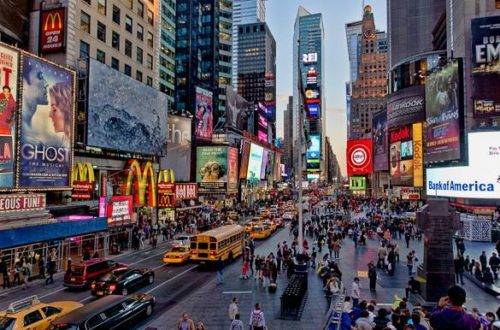 With so many tourists visiting the NYC area over the holidays, it is vital to know how to properly navigate key areas. Time Square is home to over 40 theaters in the 13-block theater district, making it one of the most congested spots in the city. If you’re trying to see a Broadway show, it may seem impossible to pick up your show tickets and make curtain time when you’re fighting massive crowds during rush hour. Here is a quick guide with a few tips to navigate the busy area from 41st Street to 54th Street, like a true New Yorker. And don’t worry, you’ll make it to your seat with time to spare!

Whatever you do when walking near Times Square, stay far away from the middle. Along Broadway, from 42nd Street to 47th Street, the sidewalks are flooded with tourists gazing at the city’s oversized building. Not to mention, you will probably have several people try to swindle you into a souvenir photo. Make your life easier and just avoid this entire stretch altogether – unless you want a touristy photo. If that’s the case, don’t do it right before you’re trying to arrive to your Broadway show on time.

Most Broadway theaters are located between 7th Avenue and 8th Avenue. If you’re seeing a show at the St. James, the Majestic, the Golden, the Bernard B. Jacobs, the Al Hirschfeld, the Brooks Atkinson, the Samuel J. Friedman, the Longacre, the Eugene O’Neill, the Circle in the Square, the Gershwin, the Neil Simon, the August Wilson, or Studio 54, then walk along 8th Avenue. Or strut down 6th Avenue for performances located at the Stephen Sondheim, the Lyceum, the Belasco, the Minskoff, the Marquis, the Palace, the Cort, the Winter Garden and the Broadway Theatre.

You only want to cut to your theater once you hit the street where your theater is located. You’ll save lots of time by avoiding Times Square madness (hint Tip 1). If you’re feeling more adventurous, walk along 9th Avenue – you may potentially stumble upon a restaurant to grab a yummy pre-show snack or spot your favorite Broadway performer!

Now that you know how to navigate Times Square like a pro, it’s time to find tickets to your next (or possibly first) Broadway show! There are many different shows to see in the theater district, take the time to look around and read show reviews before you purchase Broadway tickets.

Memphis Is The Perfect Summer Getaway For Music Lovers

Hidden Tips for Purchasing A Souvenir For Your Loved Ones

Six Gateway Getaways Inspired By PANTONE’S Color of The Year