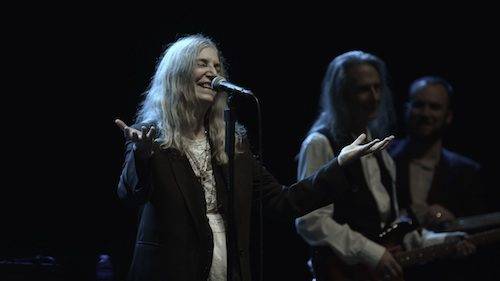 It’s almost time for one of the best festivals of the year, The Tribeca Film Fest. I have been going since its inception in 2001. This year, I am particularly excited about the new Patti Smith documentary and also the Time’s Up event as I have a few time’s up stories of my own. I am also launching a program that is the next step in the #MeToo Movement.

I am also very excited about the Tribeca Immersive program, which is spotlighting new and innovative VR projects.

Tribeca has added the world premiere of Horses: Patti Smith and her Band, Steven Sebring’s documentary film capturing the final performance of Patti Smith’s iconic “Horses” at the Wiltern Theater in Los Angeles as well as the 40th anniversary of the Horses album tour.  Following the special screening at the Beacon Theatre, Smith and her band will perform some of their most popular songs. Tickets go on sale on Monday April 2, at 12:00 PM.

TIME’S UP will host its inaugural New York event during the Tribeca Film Festival. The program will feature compelling conversations with activists, filmmakers, storytellers, lawyers and more including early TIME’S UP supporters such as Ashley Judd and Julianne Moore as well as Fatima Goss Graves (National Women’s Law Center), Robin Morgan (celebrated poet and activist), Mónica Ramírez (Alianza Nactional de Campesinas), and more. The day will explore how we got here, the women who came before us to make this work possible, and what’s next for TIME’S UP and beyond.

In addition, Tribeca Immersive is adding the world premiere of Jack: Part One. From the Emmy Award-winning creators of INVASIONS!, ASTEROIDS! and Rainbow Crowcomes Baobab Studios’ latest visionary animation that lets viewers enter the world of Jack from the classic fairytale in a groundbreaking blend of VR and immersive theater that must be seen to be believed.

The Tribeca TV program expands with the world premiere of Enhanced, an ESPN docuseries from Executive Producers Alex Gibney and Brad Hebert, that explores the frontiers of sports training, technology and recovery, as boundary-pushing innovations propel human athletic achievement to its limits.

Tickets for TIME’S UP, Enhanced, and Jack: Part One are now available on tribecafilm.com.

Following are details on the additions:

Horses: Patti Smith and her Band will be released exclusively on Apple Music.

After the screening: Patti Smith and her Band – Lenny Kaye, Jay Dee Daugherty, Tony Shanahan, and Jack Petruzzelli – will perform the title track of Horses along with some of their signature songs.

In response to the growing national movement, Tribeca Film Festival has partnered with TIME’S UP to host a day of conversations with the outspoken women playing a pivotal role in raising awareness about inequality in the workplace. Activists, storytellers, business leaders, filmmakers, lawyers, media figures, and more share their stories, seek next steps to establish the parameters for lasting change across industries and the pay spectrum.

Net proceeds from the day will go to the TIME’S UP Legal Defense Fund.

Donations to the Time’s Up Legal Defense Fund can be made here https://www.gofundme.com/timesup​

Step into the shoes of Jack and experience a world completely re-imagined from the classic fairytale.  From Emmy Award-winning creators of INVASION!, ASTEROIDS! and Rainbow Crow comes Baobab Studios’ latest visionary VR animation: the most immersive theater work to date by Mathias Chelebourg, creator of Alice: The Virtual Reality Play.

Passes and tickets for the 2018 Festival

Also available for purchase now is The Hudson Pass, an all access pass to screenings and talks taking place at BMCC, Regal Battery Park Theater, Cinépolis Chelsea, and the SVA Theatre, as well as, full access to all events at the Tribeca Festival Hub at Spring Studios, which includes VR and immersive projects, special screenings with music performances, and access to the lounges.

The 2018 Festival will offer ticket discounts on general screenings and Tribeca Talks panels for students, seniors and select downtown Manhattan residents. Discounted tickets are available at Ticket Outlet locations only.

Packages and passes are now available for purchase on the 2018 Tribeca Film Festival App, on:

About the Tribeca Film Festival

The Tribeca Film Festival is the leading cultural event that brings visionaries and diverse audiences together to celebrate storytelling in all its forms, including film, TV, VR, gaming, music, and online work. With strong roots in independent film, Tribeca is a platform for creative expression and immersive entertainment. The Festival champions emerging and established voices; discovers award-winning filmmakers and creators; curates innovative experiences; and introduces new technology and ideas through premieres, exhibitions, talks, and live performances.

The Festival was founded by Robert De Niro, Jane Rosenthal and Craig Hatkoff in 2001 to spur the economic and cultural revitalization of lower Manhattan following the attacks on the World Trade Center. Now in its 17th year, the Festival has evolved into a destination for creativity that reimagines the cinematic experience and explores how art can unite communities. www.tribecafilm.com/festival

As Presenting Sponsor of the Tribeca Film Festival, AT&T is committed to supporting the Festival and the art of filmmaking through access and innovation, while expanding opportunities to diverse creators around the globe. AT&T helps millions connect to their passions – no matter where they are. This year, AT&T and Tribeca will once again collaborate to give the world access to stories from underrepresented filmmakers that deserve to be seen. AT&T Presents Untold Stories. An Inclusive Film Program in Collaboration with Tribeca, is a multi-year, multi-tier alliance between AT&T and Tribeca along with the year-round nonprofit Tribeca Film Institute.

Marimekko For Uniqlo Is Simply Adorable