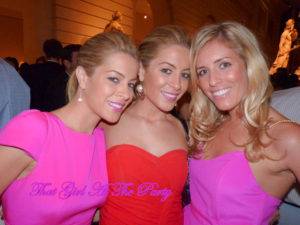 More than 1,000 young New Yorkers turned out in their finest for the annual Young Members of the Metropolitan Party. This event is always a TGATP favorite with drinks and dancing in the Milton Petrie European Sculpture Court, home to some of the Met’s most beloved pieces.  Outdoors, the beautifully dressed crowd purused the Manhattan skyline from the Iris and B. Gerald Roof Garden, which is currently home to the Doug and Mike Starn’s “Big Bambu” installation.  With so many beautiful people to shoot I, unfortunately, missed “The American Woman” special exhibition, which was also open to the guests at the soiree.

I always have a blast at this event and this year was no exception.  Upon arrival, photographers were  assigned special assistants by the Met event staff, which at first seemed a bit odd and intrusive.  But my gal ended up being a real jewel!

I spotted the fake Comcast/Liberty Capital “exec”, who somehow always gets into the Met events.  Also, in crasher attendance was the ever present Priyantha Silva, who despite narrowly escaping a beatdown at a Tribeca Film Festival party, is still running the bogus “Slumdog Millionaire” producer scam!  (Previously, it was purportedly “Crash”!  But hey, he IS Indian looking, so I guess he thinks that Slumdog is more believable!) My friend and I watched amused, as one gal kept trying to escape his annoying come on by tapping her girlfriend.  Unfortunately, her pal was too locked in her own conversation and didn’t save her.  So she was stuck, until she leapt into the arms of a passing gentleman that she knew.  I have never seen such relief on a face!  When I queried the poor gal later, she confirmed that Silva had, indeed, tried to use his fake Slumdog saga on her.  From TGATP to Gawker to Jezebel, this man’s face and story has been everywhere in the last few months!  It is really well past time that he be kept from harassing the pretty young things and legitimate guests at these upscale (or for that matter, ANY) parties!  Or alternatively, maybe it is time some network gave him his own reality show, like the Salahis!

Despite these interlopers the party proved a great success and a rousting good time for all in attendance!

Flip Me™ Dating Launches with a party at the Kimberly Hotel

Jezebel libels TGATP and makes much ado about nothing!